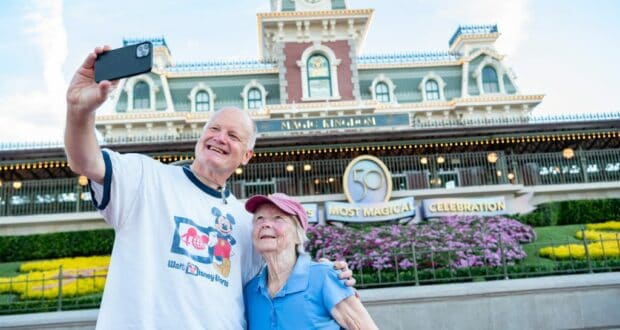 It’s no surprise that Walt Disney World is chock-full of Guests today, since it’s the resort’s 50th anniversary, and Disney Cast Members took to the Magic Kingdom’s streets to photograph the happy visitors! Several of the best shots have just been shared on the Disney Parks Blog by Jeremy Schoolfield, the Managing Editor of Walt Disney World Resort Public Relations, who expressed excitement about these “snapshots of the magical moments happening all over the park…it was a day for being with loved ones, celebrating their collective love for Walt Disney World”. Check out more of the pictures below!

There has been a lot of build-up leading to Disney World’s “Most Magical Celebration on Earth“. With two new restaurants (Space 220 and La Creperie de Paris), new nighttime shows, a new French pavilion in EPCOT’s World Showcase, new merchandise, and lots of special-edition meals on offer, it’s no wonder that the park is full of happy campers! If you aren’t able to get to Disney World today, or sometime during the next eighteen months when these special offers are happening, then you can at least tune into the live TV special that’s airing tonight at 8 EST on ABC. Christina Aguilera will be performing, Disney Legend Whoopi Goldberg will be hosting, and Disney has implied that there will be much more to come! We’ve also already seen a lovely showcase that featured Julie Andrews discussing her memories of the Magic Kingdom’s first Opening Day back in 1971.

Although the festivities are lasting for eighteen months, the actual day of Disney World’s anniversary is still particularly exciting. As Jeffrey put it, “from daybreak at Cinderella Castle to Disney bounding to popcorn and so much more, [this event] added “to the tapestry of magical moments” that Disney World already has for its “millions upon millions” of visitors. If you’re at the Parks today, or tuning in online, be sure to use the hashtag #DisneyWorld50 to stay updated on all of the Disney magic!