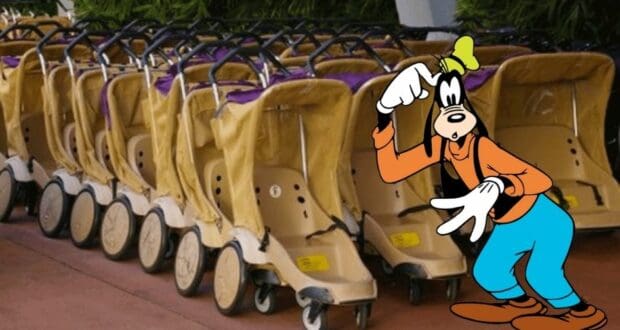 YIKES. Yes, you read that right! A former Walt Disney World Resort Cast Member shares a story about a baby left behind in a stroller while the family enjoys a Disney Park attraction. What makes it worse? This is reportedly fairly common.

Let’s talk strollers at Disney, shall we? Walt Disney World is a place for families to come from around the globe to enjoy a family getaway with loads of magical experiences. With children of all ages, seeing seas of strollers in the Disney Parks is rather common. Disney is well aware of this and recent recently released new Mickey and Minnie Mouse strollers for rent.

Unfortunately, the Disney stroller saga doesn’t end there as we’ve seen stroller theft and even a Magic Kingdom Guest melting down over a Cast Member moving her stroller into the marked stroller parking. But, can you imagine leaving a child behind in a stroller while enjoying a Disney ride?

A former Cast Member (@dapermanatee) took to social media to share a story about his experience with a baby left behind in a stroller. Apparently, he was working at The Seas with Nemo & Friends in EPCOT. When adjusting the strollers in stroller parking to make room, he realized one stroller was slightly heavier than the rest. Why? Because it held a baby!

He goes on to explain the story in the video below which results in the family having forgotten the child. But, when talking about leaving a child behind in the stroller, he also notes that “Every Cast Member has seen it once… some have seen it a bunch!”

@dappermanatee notes the possible reason for this issue with leaving children behind is that in Europe it’s normal to leave a baby behind outside of a coffee shop in a stroller all alone.

Take note that at Disney Parks it is NOT ok to leave a child behind in any way, shape, or form. Your child must remain with you at all times as it is not the Cast Members’ responsibility to look after your little one. Hopefully, this incident happens less and less in the near future!