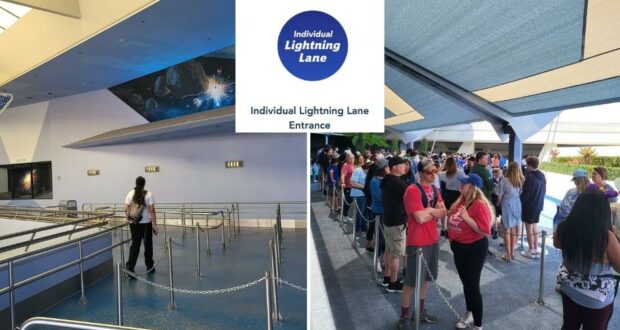 It appears that Lightning Lane troubles continue to impact favorite Disney Parks attractions to the point where Standby lines are completely abandoned.

Twitter user @hastin shared a picture in line for Space Mountain at Disneyland Park in Southern California that shows the individual Lightning Lane entrance–the one Guests pay $15 per person to use–is longer than the Standby Line. It is so much longer, in fact, that Guests are abandoning the standby line altogether.

Lightning Lane has basically broken Space Mountain. There’s maybe 200 people in Standby, but it is posted at 70 minutes due to massive LL backup. CMs in the queue are confirming that Stand-By guests *will* be waiting 70 minutes. LL is the new Standby.

There's maybe 200 people in Standby, but it is posted at 70 minutes due to massive LL backup.

CMs in the queue are confirming that Stand-By guests *will* be waiting 70 minutes.

LL is the new Standby. pic.twitter.com/MNE7UaqKwu

He also showed pictures of the barren Standby Line, saying:

They built a massive indoor queue (with Play Disney Parks screens) for half a dozen people to stand in it while Lightning Lane backs up.

They built a massive indoor queue (with Play Disney Parks screens) for half a dozen people to stand in it while Lightning Lane backs up. pic.twitter.com/wpDqAq8QWW

The paid service designed to help Guests skip long wait times replaced Disney’s FastPass+ system at the Disneyland Resort and the Walt Disney World Resort in 2021. Also unlike the FastPass+ system, and virtual queue system, Guests cannot choose their Lightning Lane times. Disney Genie Service on the My Disney Experience App or the Disneyland App only shows Guests what time slot is next available.

Individual Lightning Lane and Disney Genie Plus have been touted by Disney execs like Bob Chapek as being a financial success. However, the socially applicable success of the new system’s attraction integration appears to still be up for some debate.

Available for purchase at 7:00 am for Disney Resort Hotel Guests on the day of their Park visit, and upon entering a Disney Park for all other Guests, Individual Lightning Lane selection is available for multiple Disney attractions, shows, and Character Experiences like Space Mountain at Magic Kingdom, Frozen Ever After at EPCOT, Mickey and Minnie’s Runaway Railway at Disney’s Hollywood Studios, and Expedition Everest Disney‘s Animal Kingdom, as well as Star Wars: Rise of the Resistance at Disneyland Park and WEB SLINGERS: A Spider-Man Adventure at Disney California Adventure. It is described on its website as the following:

For some of our most highly demanded attractions, Lightning Lane entrance access is available to purchase individually. Guests may purchase and select an arrival window one at a time for up to 2 attractions a day. This option is available for all Guests—with or without Disney Genie+ service.

We at Disney Fanatic will continue to keep an eye on Lightning Lane Access and other Park topics and share them with our audience as more stories come to light.