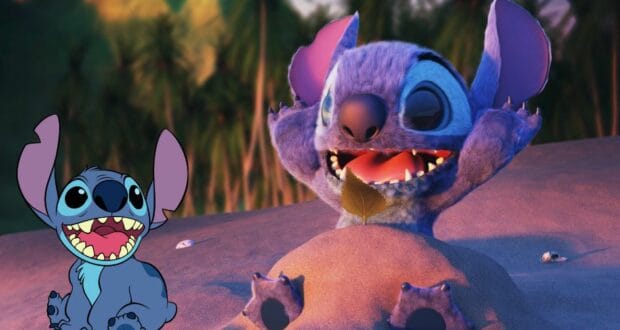 ‘Lilo & Stitch’ Live-Action Film: What We Know So Far

If you’re a fan of the Lilo & Stitch (2002) film franchise, well we have some exciting news for you. Disney announced in 2020, that a new live-action Lilo & Stitch film was in the works. Now, a few more details have been released as we hold onto our seats with excitement!

It’s no secret that Disney is on a live-action remake kick by taking several of Disney’s animated classic movies and turning them into live-action films.

Most recently, we’ve seen the dropped trailer for Disney’s upcoming Pinocchio remake which lands on Disney+ on September 8, 2022. With live-action remakes such as Beauty and the Beast (2017), Aladdin (2019), Dumbo (2019), and more… Lilo & Stitch is getting in on the action.

Get ready as the oh-so loveable blue alien we all know as Stitch (AKA “Experiment 626”) is expanding the ohana by being worked into one of Disney’s latest live-action films set to be released on Disney+. The first-look photo of Stitch in CGI (computer-generated imagery) animation was recently dropped by IMDb:

The live-action adaptation is said to follow closely with the original movie plot which was written and directed by Chris Sanders and Dean DeBlois and released in 2002. Of course, Disney has been known to adapt and change its live-action versions slightly from the classic movies.

In the original animated film, we follow along with the adventures of a 6-year-old Hawaiian girl named Lilo who lives with her sister and caregiver, Nani. Stitch is an extraterrestrial that finds himself on earth when Lilo adopts him from an animal shelter. Little does Lilo know, Stitch is an alien – but she still loves him all the same!

As their “Hawaiian Roller Coaster Ride” adventures unfold, together they become a family (AKA “ohana”) that enjoys dancing to Elvis Presley music and surfing on Hawaii’s tropical coast.

Chris Sanders is Back

So far, IMDb has reported the Walt Disney Studios’ film writers include Dean DeBlois and Chris Sanders (who wrote and directed the animated version of Lilo & Stitch), as well as the screenplay by Mike Van Waes. Chris Sanders will also voice Stitch (as he did in the animated film).

Besides the confirmation that Chris Sanders is back to voice Stitch, the rest of the cast for the live-action film has yet to be announced.

In 2020, it was announced that Jon M. Chu would be directing the live-action Lilo & Stitch. Recent news reports that Dean Fleischer Camp is now stepping in for Jon M. Chu as director.

Jonathan Eirich and Dan Lin are producers, with Ryan Halprin and Louie Provost as executive producers.

Filming is said to be taking place in Hawaii, of course! We wouldn’t expect it any other way.

According to IMDb, we also know the release day! That’s right – mark those calendars as the 1 hour and 25-minute live-action Lilo & Stitch is reportedly scheduled to land on Disney+ on May 10, 2024.

We’re eager to learn more about the live-action Lilo & Stitch and will be sure to keep Disney Fanatic readers updated as we learn more!