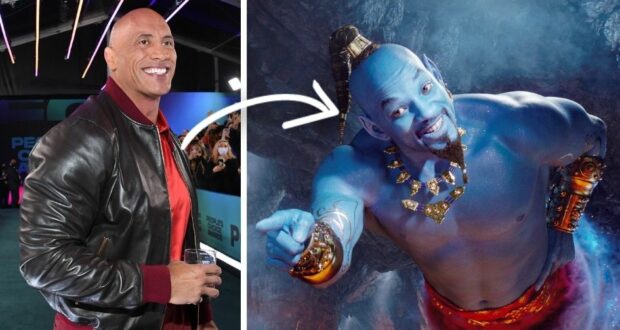 Yes, you read that right! Dwayne Johnson (AKA “The Rock”) is reportedly in talks for an Aladdin 2 role and we can’t help but be curious to know more.

It seems like everything Disney-related Dwayne Johnson touches turns to gold! The former professional wrestler turned into a megastar and entrepreneur in what seems like overnight. He became a huge Disney fan favorite with roles such as the voice of Maui the demigod in the box office success Moana (2016), Skipper Frank in Disney’s live-action Jungle Cruise (2021), and even became the Executive Producer of the Disney+ series, Behind the Attraction (2021).

According to the latest Giant Freakin Robot exclusive, “Dwayne Johnson is currently in talks to join Aladdin 2 and could be working with Disney once again.”

There are several levels to the details surrounding Dwayne Johnson joining Aladdin 2. Disney’s first live-action Aladdin (2019) was a massive success so a second film is no surprise. The interesting part however is trying to figure out what role Dwayne Johnson would take on for Aladdin 2.

Giant Freakin Robot speculates that Johnson could replace Will Smith’s Genie role in the sequel. Disney has already reportedly put a hold on a new Will Smith series after he slapped Chris Rock at the 94th Oscars for a comment about his wife, Jada Pinkett Smith’s lack of hair. With the rather conspicuous timing in all of this, it looks like just possibly Disney could be looking to replace Will Smith with Dwayne Johnson.

Or could Dwayne Johnson be joining the original cast including Mena Massoud (Aladdin), Naomi Scott (Princess Jasmine), and Marwan Kenzari (Jafar) in an entirely new role for the movie sequel?

When the speculation turns to something concrete, we will be sure to share the news of if and how Dwayne Johnson can be seen in the upcoming Aladdin 2.