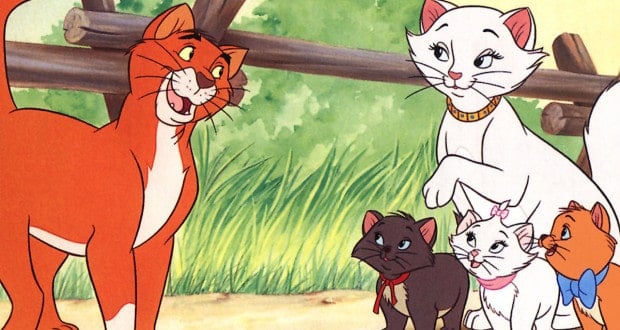 The Walt Disney Company has recently let the cat out of the bag about their plans to create a live-action film adaptation of their animated classic The Aristocats (1970). With Will Gluck set to direct and Keith Bunin of Disney-Pixar’s Onward working on the script, this reimagining has all the makings to become a new classic that’s sure to live up to the original.

But this is certainly not the first time we’ve witnessed animated animals being brought to life by Disney via a compiled mixture of CGI and/or real-life animal incorporations. And it certainly won’t be the last! Here’s a list of other previously animated animal-centric Disney films that have been remade from their originals into live-action features.

The 1996 live-action remake of the animated classic of the same name, released in 1961, was pretty straightforward in its approach of recruiting actual living dogs to the roles. The reimagining for this adaptation muted the menagerie almost entirely (with an exception of laughing raccoons in one scene). This was a deviation from the original storyline, which featured the entire animal ensemble having the ability to converse amongst. There were minimal CGI effects used in the 1996 movie except for a couple of instances, where necessary. The same cannot be said of Disney’s more recent release of Cruella from 2021, which used a combination of real and CGI-created dogs alike.

Related: How Well Do You Know Disney’s 101 Dalmatians Characters?

Given their scarcity in the realm of reality, it pretty much goes without saying that Disney’s 2016 reboot of Pete’s Dragon enlisted the effects of computer-generated imagery to give the titular creature a live-action screen presence. And we have to say that the effects are pretty spot-on, given the fictional nature of the dragon and the fact that we do not have a whole lot of real-life references to go by. While the original 1977 version of Pete’s Dragon was also a live-action film, Elliot the dragon, as depicted in that production, was done as a traditional product of cartoon animation and featured via a mix of animation/live-action interaction with human actors.

In the original classic from 1950, Disney presented the titular heroine’s mousey companions as anthropomorphic in nature, garbed in clothing and able to speak. The live-action remake in 2015, however, took a more traditional approach to the onscreen presence of the featured creatures. They did, however, retain personified features and expressions, which is why they were done as CGI creations.

Despite the impressive believability at work within Disney’s The Jungle Book—a live-action remake of the original animated classic from 1967—all of the animals that appeared in the 2016 film were completely done using computer-generated imagery. Admittedly, of course, Disney’s astute team did rely on the likenesses of existing animal species in order to get the presentation down so precisely. And when you compare the animal effects in this film to earlier (or even co-contemporary) animals film creations, The Jungle Book is the uncontested game-changer in the industry—a first in presenting convincing CGI animals that are in no way campy or phony looking.

In fact, it’s virtually indiscernible that the creatures you see on the screen here aren’t real. Perhaps the biggest giveaway is the logical questioning and reasoning behind the fact that there is a living, human child acting in such close contact with so many different wild animals all at once. While not entirely impossible, it would have been a most difficult feat to pull off indeed. Thankfully the effects at work not only lived up to the task, but also far exceeded their projected potential.

The aforementioned live-action adaptation of The Jungle Book opened the door for Disney to use the same tactics to bring to life another beloved animated animal-centric classic—The Lion King. While the various onscreen portrayals of Africa’s diverse wildlife is entirely believable in every sense, there were actually no real-life animals recruited to the various roles. This leads some to question whether or not this movie can actually claim to be a “live-action” retelling or rather a new category of animated realism.

The Jungle Book did, after all, contain at least one real-life human presence (a few, actually when you consider the flashback scene). But given the fact that the CGI at work here is convincing enough to be of nature documentary quality (aside from their talking and facial expressions), we’ll go with its reference to being deemed a live-action work. And because Disney incorporated the physical attributes of the real-life creatures portrayed in this film, there were some changes that resulted in this version when compared to the original animated adaptation from 1994.

For example, it’s good to see Pumbaa made out to be a more commonly colored warthog. And knowing what we know now about lion status being connected to darker manes, the decision to forego Scar having a black mane in this retelling is almost like a correction to the former fallacy.

Related: The Circle of Life: How The Land Before Time Inspired The Lion King

When Tim Burton decided to adapt the animated Disney 1941 classic, Dumbo, into a reimagined live-action production for 2019, it was pretty much a given that the film would rely exclusively on CGI in bringing the title elephant to life. For starters, the idea of using real-life elephants is both controversial and taboo in today’s entertainment industry. Then there’s the whole bit about Dumbo having both an unusual appearance as well as an unusual ability to fly. It just couldn’t be done on any level had they recruited an actual elephant for the role.

There are a couple of creature features at work within the live-action remake of Disney’s Aladdin, which was one of Disney’s biggest blockbuster hits of 2019. The animal with the most screen time in this flick is, of course, Abu the monkey—the title character’s best buddy and partner in crime. Then there’s Rajah, Princess Jasmine’s pet Tiger, who lives within the palace walls, no less. And we can’t forget Jafar’s snarky scarlet macaw parrot, Iago.

Again, all these creatures were done using a full CGI process, although Disney followed suit in its other well-versed animal-led productions by modeling each one after real-life creatures. It’s easiest to see this in Abu, largely due to his many human-like facial expressions. For Rajah, it comes to the matter of whether or not it would have been safe or convenient to have a tiger share so much screen time with human actors and actresses. Iago is the one that really could have been a real parrot, had Disney decided to recruit one to the set. It goes without saying that other animals that appear in the film, like the elephants, were also CGI.

While Disney has successfully proven that they can bring about a convincing onscreen showcase of animals using CGI, there are just some portrayals that work best when authentically orchestrated. And that is the case for their live-action adaptation of Lady in the Tramp, which did recruit furry friends to fill the roles here. The canine cast for this film, in fact, was comprised of shelter dogs—all of whom have since been adopted by loving owners. A Cocker Spaniel named Rose played Lady while Tramp was portrayed by a mutt/terrier mix named Monte.

Disney did implement minimal CGI in some instances, however, with the most prevalent being those times when we see the dogs’ mouths move in synchronization with their speech. And we can’t overlook the hideousness of the rat and all those maniacal, evil expressions! That’s just something not even the most trained of rodent recruitments would be able to pull off.

Related: Only 1 In 50 Disney Fans Can Name These 18 Disney Dogs

As we wait in eager anticipation for Disney’s new live-action presentation of Aristocats, we can’t help but wonder whether they will be going the real-animal route or turn to impressive computer-generated imagery exclusively. Since Will Gluck was the director behind Peter Rabbit, and given the fact that the animal portrayals in that film were done fully in CGI, (and were somewhat anthropomorphic) we can see how this new movie may be entirely CGI as well. And that’s what many of the rumors online appear to indicate.

But then again, it’s still early in the game, and we can’t know anything for sure about what will eventually be.  Whatever the final verdict may be, however, we know from Disney’s many other successes in adapting classic animation into live-action productions that it’s sure to be the cat’s meow.