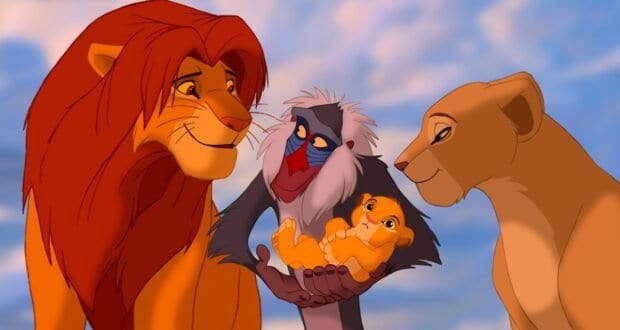 The Circle of Life: How The Land Before Time Inspired The Lion King

The age-old tale of an orphaned character undertaking a perilous journey is something we’ve become pretty familiar with over the decades. And Disney is no stranger to such story-telling structures, with the likes of The Jungle Book and The Lion King being only two examples out of many. They all seem to feature animals too – which is an extremely popular overlay when it comes to animated films, whether it’s Disney or another studio.

Take The Land Before Time as another example – it isn’t a Disney film (even if on first glance you might think it is), yet it can be quite easily compared to one. In this case, perhaps it is most comparable with The Lion King. In fact, there are many similarities between the two films. We’re not suggesting that the iconic Disney movie has ‘ripped off’ the 1988 classic, but there is undoubtedly a strong relationship between them from a storytelling and thematic perspective.

So here’s why we think The Lion King and The Land Before Time are both part of ‘the great circle of life’!

It would be unreasonable to suggest that The Lion King and The Land Before Time share the exact same story, but they do both revolve around a newly orphaned hero who befriends a rag-tag team of characters as they try to find their way home. Sure, Simba’s journey is very different to that of Littlefoot, as he runs away from the Pride Lands when his uncle convinces him that he’s responsible for the death of his father, Mufasa. Littlefoot, on the other hand, embarks on a treacherous journey across a prehistoric landscape following the death of his mother, as he searches for new land.

What is similar are the characters’ stories, in that they each blame themselves for their parents’ death and must then find their own way in the world. That, and their arcs, which see them go from vulnerable, responsibility-fearing children to courageous heroes. As for personalities, beyond their naiveté, Simba and Littlefoot are nothing alike. Young Simba is carefree, while Littlefoot is anxious. If we were to compare Simba to any character from The Land Before Time, though, it would be the equally-obnoxious and trouble-seeking Cera, who also happens to laugh in the face of danger!

As for overarching themes, if there’s one takeaway from The Lion King, it’s having the courage to move on from your past, no matter how painful. As Rafiki says to Simba, “You can either run from it, or learn from it”. These themes revolve largely around dealing with death and grief, which is something else the film shares with its prehistoric ancestor The Land Before Time. However, that film also has its own themes that are nowhere to be found in the Disney film, in that it includes prejudices, as dinosaurs appear to ‘judge’ any other species that isn’t their own.

Related: Why Doesn’t The Lion King Have a Bigger Presence at Disney Parks?

In The Land Before Time, following a cataclysmic event in which volcanic activity causes the earth to split everywhere, Littlefoot, who is grieving the loss of his mother, encounters an old ankylosaur (who also happens to be the narrator of the film). The dinosaur suggests to Littlefoot that what has happened to his mother is natural, that the “great circle of life has begun”, before adding, “she’ll always be with you.” This dialogue seems to revolve around themes of nature and death, and it’s here where things do get a little questionable when comparing the two films!

Not only is the term ‘great circle of life’ obviously used a number of times in The Lion King (it’s also synonymous with the film), but the old dinosaur’s consoling words to Littlefoot also seem to have inspired the scene in the Disney film in which Simba asks Mufasa if they’ll “always be together”, before his father explains to him about the “great kings of the past” living in the stars, and the “great circle of life”. The dialogue and concepts are near-identical to The Land Before Time, but so are the themes themselves, especially those that revolve around the construct of nature.

But this isn’t the only time The Lion King appears to borrow a scene from the 1988 dinosaur classic. In The Land Before Time, after hearing the voice of his dead mother (which is represented in the form of a watery reflection, no less), Littlefoot thinks he can see his mother’s shadow moving across the land, and then chases it, hoping he will be reunited with her. If it wasn’t for the fact they were dinosaurs, you’d think you were watching the scene in The Lion King in which Simba sees his father in his reflection, speaks to his spirit in the sky and then chases him!

While it might sound like we’re suggesting that The Lion King borrows a lot from The Land Before Time, whether it’s plot, character, story structure, themes and even scenes, you might be surprised to learn that the two don’t just share the concept of ‘the great circle of life’ – they also happen to be a part of it themselves! There is no doubt whatsoever that the 1994 Disney film takes inspiration from the 1988 movie by Don Bluth and George Lucas, but The Land Before Time takes inspiration from a Disney film itself – and that film is the 1940 classic Fantasia.

You might be wondering how exactly a musical film starring Mickey Mouse inspired a film about dinosaurs, but Steven Spielberg’s studio Amblin Entertainment wanted to make a film about the incredibly popular prehistoric reptiles, and admittedly took inspiration from Fantasia’s “Rite of Spring” sequence. Of course, there’s no dialogue in the animated musical, which is what Amblin originally wanted for The Land Before Time, but ultimately it was decided that speech was necessary to tell the desired story and flesh out the characters and themes.

So now you know that The Lion King and The Land Before Time are part of ‘the great circle of life’ of filmmaking. The animated dinosaur classic took inspiration from a Disney movie, and would go on to inspire a Disney movie itself six years later. What’s the next step in the evolution of this chain of movies? Well, we’d have said a CGI reboot of each film, but we’ve already had both! 2019 saw The Lion King brought to life in photorealistic computer effects, and as for The Land Before Time, let’s not beat around the bush – do you remember 2001’s Dinosaur? Need we say more?!

We love both of these films, and while they share many similarities, they also have enough differences to have their own identities. We also will continue to draw comparisons, as we’d love to see a CGI reboot of The Land Before Time (we think one is long overdue!), and also a stage musical not unlike Disney World’s A Celebration of the Festival of the Lion King!