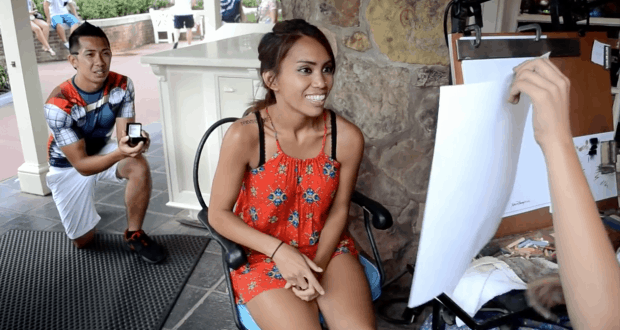 While Disney theme parks feature some memorable taglines such as “The Happiest Place on Earth” and “The Most Magical Place on Earth”, some Disney fans add a moniker of their own – The Most Romantic Place on Earth.  Rather than just being a place for kids or families to have fun, Disney has played such a big role in some couples’ lives that they find the Disney parks to be wonderful places to share their love with one another.  And in fact, Disney has made a big business of hosting weddings at their resorts. But before the knot can be tied, somebody has to pop the big question.  And Disney parks have proven to be a popular destination for proposals to take place.  Here are 10 of the best proposals to take place at Disney Parks:

A huge production isn’t necessary to make a proposal video cute or memorable.  In “GoPro Disney Proposal – Andrew & Taylor”, Andrew films as he, his girlfriend Taylor, and her family walk up Main Street in Magic Kingdom toward Cinderella castle.  They stop for a family picture with a Disney photographer.  Then to Taylor’s surprise, Andrew gets down on one knee to propose as her family looks on.  Best of all, the Disney photographer is right there to capture the moment with a number of photographs.  Another Disney photographer even joins in to make sure that they have plenty of photos to mark the occasion!

Some Disney proposals are short and sweet.  In the clip called “Magical Proposal at Hong Kong Disneyland”, Wai Ling and his girlfriend pose for a Christmas photo with Mickey and Minnie. He then steps out so that his girlfriend can get a photo by herself.  When he steps back into frame, he quickly gets down on one knee to propose. Mickey and Minnie dance around excitedly as she says yes and the couple embraces.  Then the four of them strike an adorable pose for an engagement photo.

A number of videos feature the caricature artists at Disney parks, which must really brighten up the typical work day for those particular Cast Members!  In a video simply titled “Caricature Proposal”, Quoc and Kriston get their caricature drawn at Magic Kingdom.  Quoc sits for the artist first, and then as Kriston takes her turn, he gets the engagement ring out and kneels behind her.  The artist shows Kriston the finished caricature, which shows Quoc holding a ring and asking her to marry him.  She seems to find the drawing cute, and perhaps even a little mean, but then turns to see Quoc on one knee.  Tears commence as he professes his love and pops the question!

A video clip called “Fairytale Disney Proposal” shows a young couple as they start their vacation at the beach before ending up at Disneyland. They hop on Storybook Land Canal Boats, which is a charming slow boat ride through miniature fairytale destinations from classic Disney movies.  The future groom presents his princess with a tiara but doesn’t stop there.  He gets down on one knee in the boat, opens the most adorable and appropriately designed ring box ever, and pops the question. The Cast Member even stops the boat for the moment.  After she says yes, the boat finishes its journey to reveal another surprise. Their friends and family are waiting for them while holding up signs that read “…and they lived happily ever after”.

6. A Slow Boat to Engagement

Another proposal with a nautical theme and signs is “Brittany Kyle Gets Engaged at Disneyland”.  As Brittany and her friend ride the Mark Twain Riverboat, they encounter signs being held up by other guests on land along the way.  The video starts after the friends see someone holding up a sign with “Brittany” written on it.  They then encounter signs with “will”, “you”, and “marry” before her boyfriend walks up behind her with a sign that reads “me”, revealing that he’s been on the boat all along.  You’ll love the stunned look on her face at the point when she reads the “marry” sign and starts to suspect something’s up!

Proving that love truly is the international language, many English-speaking Disney fans might not know exactly what is being said in “Phoenix & Sunny Wedding Proposal (Hong Kong Disneyland)”, but they will certainly recognize the emotion and beauty of the moment.  With Hong Kong Disneyland decorated for the Christmas holidays, a tuxedo-clad Phoenix surprises his girlfriend Sunny on Main Street, U.S.A. with an enormous bouquet of roses, a ring, and a very important question.  The nighttime setting and production value of the video make for a truly eye-catching proposal.

Another creative way that some couples choose to set up a proposal at Disney resorts is through a scavenger hunt.  In a video with the simple title of “Disney Proposal”, Jacob gives his girlfriend Cary the task of making her way through a series of clues while walking around Disney World’s Magic Kingdom.  After a couple of silly clues, the surprises begin.  First, her parents are waiting at one of the stops. Then she finds his parents. Cary’s final clue leads her to Jacob at the front of the park, where he gets down on one knee to propose. Appropriately enough, it’s right in front of the sign reading “Let the Memories Begin!”

3. A Straight to Video Proposal

Putting on a big production when attempting a proposal in a Disney park could get you quickly escorted out, so you have to get creative if you want a memory that will last forever.  Curran first asked out his girlfriend Shari with an elaborate Aladdin-themed production, so his proposal eight years later has to be even bigger.  In a video called “Surprise Disney Proposal”, he and his friend Tim accomplish this by creating a video for Shari to watch on a phone while she’s at Disneyland with Tim.  As she watches it in front of Sleeping Beauty Castle, she is directed to look around and is surprised to find friends and family all around.  Finally, she is directed to turn toward the castle, where Curran is waiting in a tuxedo to propose.

2. Shell-Shocked by a Proposal

When you take things up a notch by involving the Disney company in your proposal, the result is truly memorable.  In “Disney’s Turtle Talk Proposal”, Ethan gets Crush’s help in proposing to his girlfriend Courtney.  During the Turtle Talk With Crush show, Crush seems to randomly call the couple up to the front to play a game.  He has everyone in the audience – including Courtney – close their eyes and then open them when he counts to five.  When everyone opens their eyes, Ethan is on one knee in front of Courtney with a ring in hand.  With a woman in the audience urging her to “say cha”, Courtney accepts.

1. Engaged in a Flash

After five years of dating, Jamin decides to propose to his girlfriend Val and the result is an amazing video titled “Jamin’s Downtown Disney Flashmob Proposal” that you simply cannot watch without smiling!  As Jamin and Val walk through Disneyland Resort’s Downtown Disney District, they are distracted by a couple of girls dancing to the song “Marry You”.  They stop to watch and laugh as more dancers jump in to take part.  Then to Val’s surprise, Jamin jumps in and seamlessly joins the choreography.  At that point, Val realizes that the whole production is for her and she covers her look of shock and surprise with her hands.  The song ends with a proposal, and she easily accepts – through the hands that she’s still holding to her face!  I defy you to watch this incredible proposal and not crack a huge smile!

Searching for Disney marriage proposals online will take you down a long rabbit hole of videos, many of which are outrageous or sentimental while others are decidedly more low key.  Either way, we’re fortunate that other Disney fans enjoy sharing the biggest moments of their lives with the rest of the world for our entertainment!