Maleficent Is Returning To Disney Plus

While almost all of Disney’s movies are on Disney+, there are a few that have only been on the platform briefly. The 2015 live-action Cinderella is one of them (and it still hasn’t come back to Disney+ yet, sadly) but Maleficent will be back for viewing as of next Friday, September 24th! While its sequel, Maleficent: Mistress of Evil has continued to stay on the streaming platform, many fans felt that it was simply a better experience to watch both movies in a row and have a Maleficent marathon. The movie features Angelina Jolie in what is arguably her most iconic role, and one that many audience members felt she was practically ‘born’ to play: Maleficent. With Jolie’s strikingly sharp good looks, high cheekbones, piercing gaze, elegant voice, and sleek poise, she was a shoo-in for the role, and many fans eagerly awaited the movie’s premiere once it had been announced that she was cast! 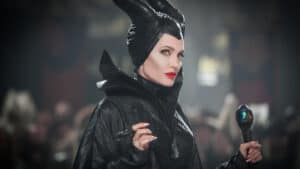 Elle Fanning’s Disney princess Aurora (aka Sleeping Beauty) served as a wonderful foil to the Disney villain; her natural grace, delicacy, and femininity were all in perfect contrast to Maleficent’s cold mannerisms, raw (almost violent) movements, and attempts at stoicism. The movie’s amazing costumes and special effects only added to its success (just take a look at the wedding dress below for evidence!), and while the sequel was not as well-received as its predecessor (due to a rather weak plotline with Michelle Pfeiffer as the villain and a recast version of Prince Philip), it can still serve as a wonderful experience visually, and Jolie is still enchanting as Maleficent. 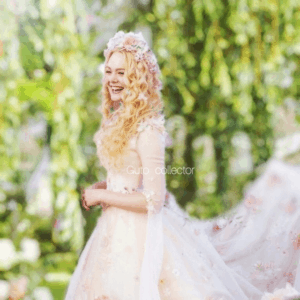 Are you excited to watch the first Maleficent movie again? Do you think that the sequel was equally entertaining, or will you stick with watching the first movie? And how do you think that the Jolie adaptations compare to the original 1950 Sleeping Beauty movie about Briar Rose (also known as Aurora), Prince Philip, and the three fairies? 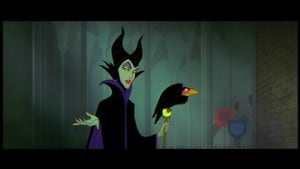