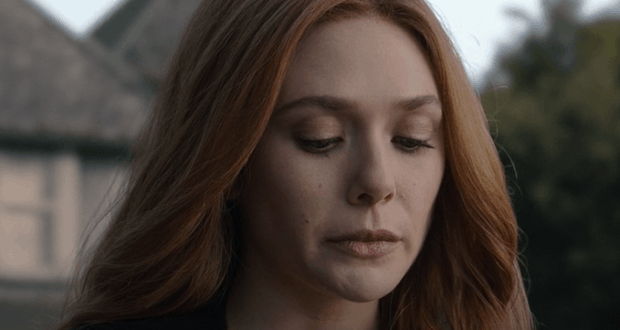 This week’s WandaVision might have been the most unusual yet, if only for how relatively straightforward it was. There were no sitcom realities, no Darcy, Jimmy Woo or Monica Rambeau, and barely any S.W.O.R.D. involvement at all until the post-credits scene. Instead, the majority of “Previously On” was a two-hander between Elizabeth Olsen’s Wanda Maximoff and Kathryn Hahn’s Agatha Harkness.

Fans wondered a few weeks back why the show went to such great lengths in scripting an entire exchange between Jimmy and acting director Tyler Hayward based entirely on making it clear that Wanda didn’t have a codename or superhero alter-ego, and we finally found out why. For the first time ever, Scarlet Witch was said out loud in the Marvel Cinematic Universe, right before the episode cut to black.

Prior to that moment, we’d seen some of the gaps in Wanda’s backstory filled in, and even in the real world it appears as though everything is far removed from how she remembers it happening. Of course, we got yet another powerhouse performance from Olsen, and as you can see from the reactions below, viewers think that an Emmy is as good as hers.

This is just one of many examples of calls for an Emmy.

It would be a major shock if Olsen and Hahn didn’t at least make the shortlist when the Emmy nominations are announced, given the consistently high quality of work the two stars have put in over the last seven weeks. The WandaVision finale has built up quite the head of steam, but there are still so many moving parts and subplots in play that we’ve got no idea how things are going to pan out. And you can bet that if the ‘Please Stand By’ screen flashes up next Friday without a clear resolution, there’s going to be a riot.