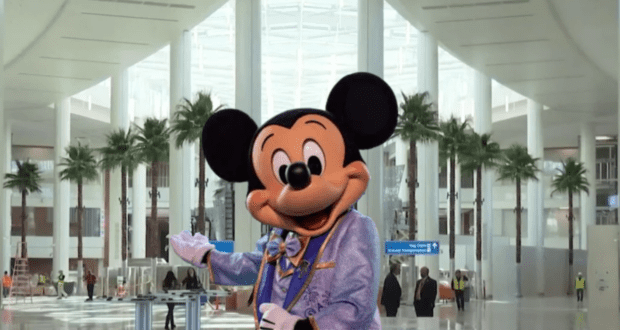 If you’re traveling via plane to Central Florida to visit “The Most Magical Place on Earth” in the near future, you’ll be thrilled to know Orlando International Airport is soon to boast an all-new terminal!

Walt Disney World Resort welcomes Guests from around the globe. With its four Parks, seemingly endless Resorts, and plenty of Disney experiences, it’s no wonder the Orlando International Airport (MCO) is bustling with travelers.

RELATED: Why Doesn’t Walt Disney World Build Its Own Airport?

Even though Disney has recently removed the Magical Express service that transported Guests to and from their Disney Resort, there are still other options available to reach the Walt Disney World Resort property.

Disney is still apparent when arriving at the Orlando International Airport with the recent decor for Walt Disney World’s 50th Anniversary, along with the Disney Store for travelers to snag all sorts of Disney souvenirs before or after they take to the sky.

And now, MCO is rolling out a new airport terminal that is sure to impress with outstanding technology!

Introducing… “Terminal C”… which is costing MCO a lovely $2.8 billion to build. According to a report from ClickOrlando, the terminal will be largely automated.

With no official completion date just yet, we do know the new Terminal C, is “soon-to-be-completed” as construction continues on the South terminal at the Orlando Airport.

Terminal C is located past the TSA security checkpoint and will be available for passengers boarding mostly JetBlue planes across a total of 15 gates. From the top-down, the construction is unfolding a stunning space allowing for a vast glass ceiling, allowing the Florida sunshine to pour in.

The MCO Airport CEO, Kevin Thibault said Terminal C will deliver “beyond” the “Orlando experience.” “International arrivals are going to come up through these different corridors and they can see the sunshine when they come out here and really know that they’re in the Sunshine State. They’re going to get the whole Orlando experience right away.”

What’s all this technology we’re talking about? Travelers can expect a giant interactive LED wall to help pass time along with an automated screening. At the TSA checkpoint, expect the new baggage bins to be continuously moving on conveyors belts to avoid the usual bin pileups.

Plus, boarding pass readers and facial recognition will be implemented at the 15 new gates to speed up the boarding process which will be especially important with the up to 12 million passengers per year Terminal C will allow for when it opens.

Have you ever lost luggage? Have no fear as all checked luggage will be tagged with a tracker so passengers can drop off their luggage as the airlines will be able to track the bags at any given moment. Interestingly enough, the baggage claim will be at the top of the terminal, not the bottom, right after getting off the plane so passengers can grab their luggage and go.

Planes may be one way of traveling, but if you’re looking to experience the Brightline trains to South Florida, the new terminal will be connected with a bridge to the new Intermodal Facility housing the trains.

As noted above, the MCO CEO, Thibault, has not provided an official opening just yet but has stated “Summer 2022”. We can’t wait to see the ease this new Terminal C brings to traveling to Walt Disney World Resort and beyond in Central Florida!