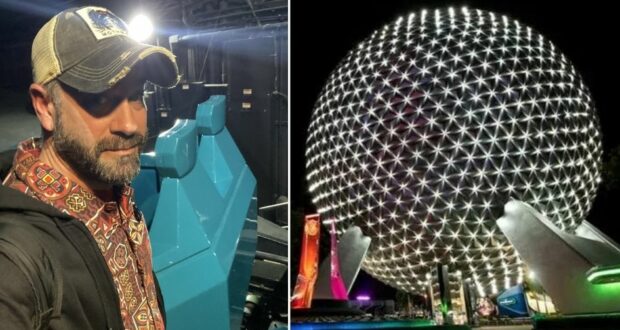 Have you ever been stuck on a Disney attraction? It happens! A popular Storyteller and Paranormal Journalist took to social media to share his EPCOT evacuation story.

EPCOT is brimming with excitement as Disney Guests flood the Park to experience the EPCOT International Flower & Garden Festival, along with newer experiences such as Space 220 Restaurant and Remy’s Ratatouille Adventure in the expanded France Pavilion.

With crowds come imperfect experiences… one being attractions breaking down. The popular EPCOT attraction, Spaceship Earth (which is also the Park icon) broke down, causing an evacuation.

A Paranormal Journalist and Storyteller, Aaron Sagers, recently visited EPCOT and found himself stuck on Spaceship Earth. He decided to share his evacuation story on social media.

@aaronsagers posted to Twitter, “So I was stuck on Spaceship Earth at #Epcot and we had to evacuate. Talking about it on IG @aaronsagers #disney”:

Aaron takes Guests through the evacuation process via his Instagram stories which show Aaron and his sister stuck near the very top of the Spaceship Earth attraction. They are sitting in the room that turns vehicles towards the Earth simulation on the ceiling of the ride.

Aaron laughs about the fact that his sister still thought it was a good idea to go on Spaceship Earth despite the attraction being shut down multiple times earlier in the day.

The lights are on as messages inform Guests of the malfunction. Aaron’s sister adds “now you get to see the magic!”

As Guests remain seated, Aaron talks about their ride experience as a “broke-ass time machine”.

The next thing you see are Cast Members arriving to help evacuate Guests from their ride vehicles. As “Travelers” exit their vehicles they form a line and begin the walk towards the exit.

You can hear the chatter of children being impressed with the evacuation process in the background along with the repeated message that the attraction is “Unable to complete our show”. The safety message of looking down at the stairs and watching your step, along with using the handrail is replayed.

Aaron notes that Cast Members were doing a great job. Apparently, the attraction had malfunctioned multiple times that day and the day before. One Cast Member told Aaron they had to clear the ride four times in that single day.

The exit from the top of the ride where Aaron and his sister were located, to the bottom of the ride, is a full 12 flights of stairs. Aaron notes they were “Heading into the depths of Spaceship Earth” with a “Really dark space”.

Keep in mind that Spaceship Earth is due for an update! Disney knows this, as they had pre-COVID plans to give the beloved attraction the facelift it needs. Alas, the Spaceship Earth remodel has currently been put on hold.

And while it would have been interesting to hear, Aaron did not provide any paranormal insight into the iconic Spaceship Earth. The attraction must only be filled with time travel pixie dust!