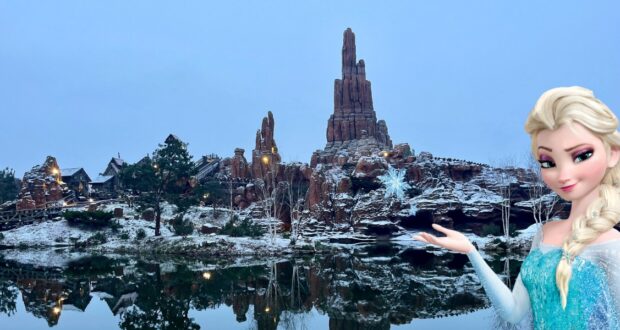 He started the day on Main Street, U.S.A., which was sprinkled with a thin layer of glistening white.

❄️ Main Street with a light blanket of snow this morning ✨ pic.twitter.com/hxqCi7rMYq

Then showed us a view of Sleeping Beauty Castle in the snow.

❄️ And Sleeping Beauty Castle in the snow!✨ pic.twitter.com/Pr7bVwN5SO

Read More: Want to See Snow at a Disneyland? Here Are Your Best Chances

Even the newest land, Marvel’s Avengers Campus, got its first snowfall, with piles of it covering the quinjet (they might need to deice it before it is flight ready again).

A snowy day at a Disney Park can be a magical experience; although it is tough to predict exactly when it will snow, most snow days have occurred between late December and early February. Would-be Guests should note, though, that when a Disneyland turns into a winter wonderland, certain experiences are shut down or canceled for the day. In most cases, outdoor attractions will be closed for the day, and certain entertainment offerings like parades will be canceled. It is not clear at this time what experiences, if any, were negatively affected by this snowfall.