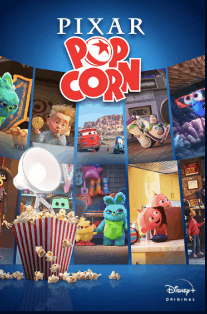 It was announced back in December that we could look forward to a new Disney+ series called “Pixar Popcorn” and it has now arrived on Disney+ and we can’t wait to see what it beloved Pixar characters will make an appearance.

If you don’t know, Pixar Popcorn is the collection of 10 mini shorts features characters from Pixar favorites like “Toy Story,” “Finding Nemo,” “Cars” and “The Incredibles” in all-new, bite-size stories created by Pixar Animation Studios’ talented animators. All episodes are now streaming on Disney+.

Pixar Popcorn will bring 10 new mini shorts to Disney+ starting today, January 22nd, 2021. We have been told previously that we can look forward to seeing these titles and Pixar friends.

We are super excited and thrilled to have these shorts to look forward to!

Which Pixar friends are you looking forward to seeing?