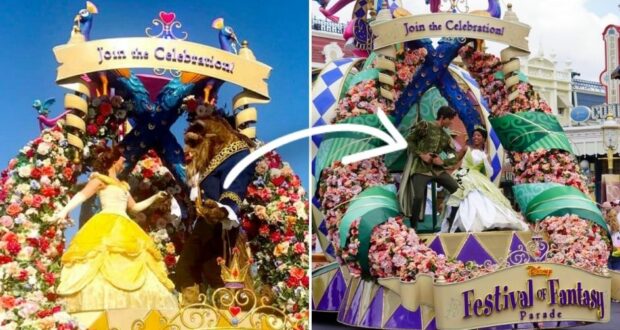 UPDATE! We are receiving word that Belle and Beast have returned to the front of the Festival of Fantasy Parade on April 26, 2022.

Princess Tiana and Prince Naveen are front row and center at Magic Kingdom Park as they have replaced “a tale as old as time” in the Festival of Fantasy Parade.

Walt Disney World Resort and Disneyland Resort have been on a big push to let the light shine on Disney’s animated film, The Princess and the Frog (2009). Disney has announced a complete retheme coming to Splash Mountain as it will soon feature The Princess and the Frog. Disney’s desire is to remove Splash Mountain’s Song of the South (1946) current theme to continue in efforts to be more inclusive.

Not only are we seeing Princess Tiana step in at Splash Mountain, but recently EPCOT offered a special Princess Tiana-themed playground that welcomed young Guests. Plus, Tiana is now part of the Disney Park return of the Main Street Electrical Parade at Disneyland Resort.

With the return of Magic Kingdom Park’s Festival of Fantasy parade, we have seen a few changes, but Disney waited to roll this one out until today, April 25, 2022.

The very front of the Disney’s Festival of Fantasy Parade has always held Princess Belle and the Beast from the classic Disney film, Beauty and the Beast (1991). Now, it looks like the couple has been replaced by Princess Tiana and Prince Naveen.

@mousesteps took to Twitter on April 25 to share, “Princess Tiana and Prince Naveen replaced Beauty and Beast to front the noon Festival of Fantasy Parade #magickingdom #WaltDisneyWorld” with the following image below:

Whether this change is permanent or was only for the parade today is still uncertain.

We will be sure to share any further updates as Disney reveals them!