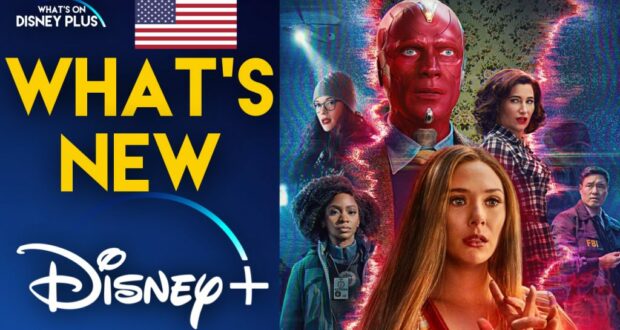 See what new shows and movies were added to Disney+ this week as we head into the weekend. What new episodes, movies and classics do you need to catch.

Marvel Studios presents “WandaVision,” a blend of classic television and the Marvel Cinematic Universe in which Wanda Maximoff (Elizabeth Olsen) and Vision (Paul Bettany) – two super-powered beings living idealized suburban lives – begin to suspect that everything is not as it seems.

The new short, directed by Jeff Gipson (Director of Disney Animation’s “Cycles”), takes the form of a bedtime fairytale that completely immerses audiences in the sights and sounds of Frozen 2. What starts as an ordinary evening inside an Arendellian home transforms into an adventure, where elemental spirits of Air, Fire, Water, and Earth reveal themselves through a whirlwind of 2D hand drawn effects, 3D animation, and original music.

The series follows 12-year-old Griffin Campbell, whose family has just uprooted their lives to move to the small town of Sulphur Springs and take ownership of The Tremont, an abandoned hotel, in hopes of restoring it into the lively vacation destination it once was. As Griffin begins his first day at a new school, he learns the hotel he just moved into is rumored to be haunted by the ghost of a girl who disappeared decades ago. Along the way, Griffin befriends Harper, a bright-eyed, mystery-obsessed classmate. Together, they uncover a secret portal that allows them to travel back in time. In the past, they’ll attempt to uncover the key to solving this unsolved mystery, a mystery that affects everyone close to them.

The show is about a newly blended family led by parents Bennett and Ellen, whose kids — Tyler, Avery and Chloe — are trying to adjust to life as step-siblings. … When they discover a secret about the family’s recently adopted pet dog, Stan, they decide to keep it a secret — even from their parents.

The hosts, along with a special car restoration team, refurbish classic four-by-fours of several clients spread across the UK and Europe.

Fraternal twins, Boomer and Brady discover they are the heirs to the throne of the Island of Kinkou, which will change their life dramatically.

Disney Roll it Back (s1)

A spin-off web series based around the Disney Channel show, Just Roll With It

Jake is keeping a secret from his teachers and classmates — he’s a descendant of dragons! Still facing all the normal pitfalls of being 13, Jake is also in secret training to become the first American Dragon. With the help of Grandpa Lao Shi and 600 year-old Fu Dog, Jake seeks to protect all the magical creatures living amongst humans in Manhattan. Always on a skateboard, Jake befriends unicorns, leprechauns, and mermaids while aspiring to fulfill his Chinese-American heritage.

This is a series of shorts featuring Mickey Mouse and gang, which was made for Disney Channel Asia.

The film-maker sheds light on the creatures found in and around Upper Okavango river in Southern Africa, where herbivores and carnivores co-exist.

What will you be watching this weekend?