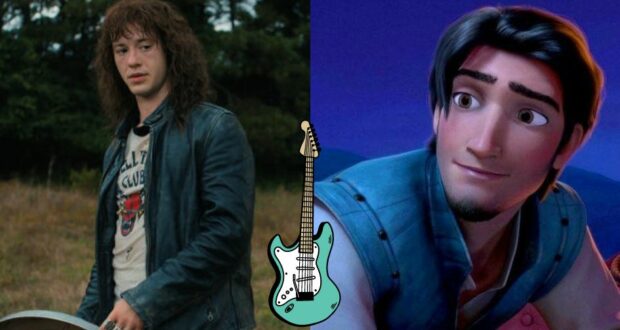 When the show Stranger Things premiered on Netflix in 2016, it was a huge success. Now that season four of the show has been released, Stranger Things fans have a new favorite character named Eddie Munson (played by Joseph Quinn) — and one fan has given Eddie Munson a Disney makeover to match a dashing Disney prince!

Flynn Rider (known by those close to him as Eugene Fitzherbert) is the comical hero who falls in love with the Disney princess Rapunzel in the 2010 animated movie Tangled (and essentially becomes a Disney prince once he marries her). Flynn Rider is voiced by Zachary Levi and he might not seem like a Disney character who has much in common with Stranger Things guitarist Eddie Munson — but a fan named Samuel Chevé has created fan art that demonstrates the characters’ potential similarities.

In an Instagram post, Samuel Chevé shared several variations of the “Flynn Rider” version of Eddie Munson (who he called “the best character” on Stranger Things). Check out the end result in the Instagram post shown below!

Eddie then teams up with Dustin ( played by Gaten Matarazzo) to defeat Vecna — and the Stranger Things season 4 finale includes a memorable guitar performance in which Eddie plays Metallica’s “Master of Puppets”.

Are you a fan of the Netflix show Stranger Things and Tangled — and did you ever think that the two would be combined, particularly if the combination involved Johnny Quinn’s character Eddie Munson?