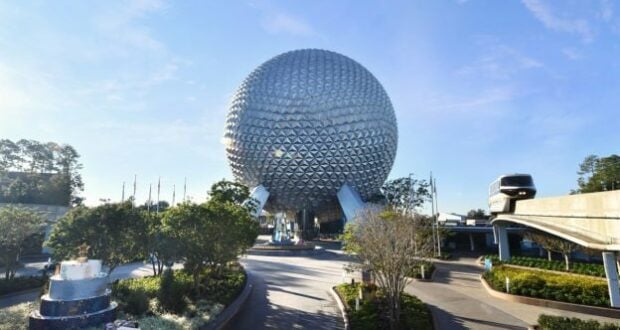 In the Magic Kingdom, you can find the Super Zoom Magic Shot with the Disney PhotoPass photographer outside the Plaza Restaurant near the hub. This shot offers a beautiful vantage point of the park while it’s zoomed out, and where it zooms in on you and your family it could be downloaded and used for a fun digital holiday card.

While visiting EPCOT, the Super Zoom Magic Shot is located at the PhotoPass station nearby the fountain at the main entrance to the park (it’s next to the Tiny World Magic Shot, so you should grab one of those while you’re over there!) Of course, you can always grab classic family photos in all of these locations, too, and we recommend getting both because each of these photo spots offer such gorgeous views of the parks. As you explore EPCOT, you’ll also find PhotoPass photographers in many of the countries around World Showcase.

In Hollywood Studios, the Super Zoom Magic Shot is located in Star Wars: Galaxy’s Edge on the balcony to the left of the Millennium Falcon (if you are facing the ship). This is a fun photo op because in addition to the zoom feature you’ll get lots of photos with “the fastest hunk of junk in the galaxy” as the backdrop.

And last but certainly not least, the Super Zoom Magic Shot in Disney’s Animal Kingdom is located across from Expedition Everest: Legend of the Forbidden mountain closest to the water. With the view of the mountains in the background, this is one of the most beautiful Magic Shots and a fun way to remember one of the park’s most thrilling attractions.

If you purchase Memory Maker as an add-on to your theme park tickets, you’ll be able to download all of the Super Zoom photos along with any other photos taken by PhotoPass photographers or on rides during your visit. And, you can share your PhotoPass pictures on social and have the chance to be featured on Disney’s official accounts by using #DisneyPhotoPass.

All Super Zoom Magic Shots in this post are courtesy of the Disney Parks Blog.