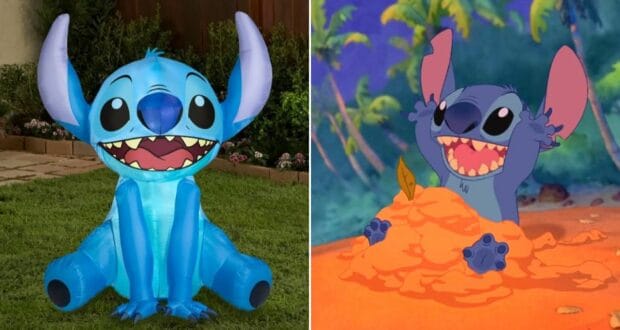 Target Is Selling a 5-Foot Inflatable Stitch, and We Want One!

The “spooky” season is arriving soon! As you’re preparing for your visit to Walt Disney World Resort’s Mickey’s Not-So-Scary Halloween Party or Disneyland Resort’s Oogie Boogie Bash, don’t forget the add a touch of Disney to your front yard.

That’s right, everyone’s favorite blue alien, Stitch (AKA “Experiement 626”), is now available in a 5-foot inflatable to welcome all neighbors and Guests this Halloween season. Inspired by Disney’s animated film Lilo & Stitch (2002), this character inflatable is too adorable to pass up.

“Introducing the Disney Limited Edition Airblown Inflatable series! These charming inflatables feature beloved classic Disney characters designed to be treasured keepsakes for fans and collectors alike. Each comes with a certificate which guarantees the authenticity of your numbered Limited Edition Airblown Inflatable. Available in three adorable styles: Stitch from Lilo & Stitch, Jiminy Cricket from Pinocchio, and Oswald, the inspiration for Mickey Mouse.”

RELATED: ‘Lilo & Stitch’ Live-Action Film: What We Know So Far

This inflatable arrives at the perfect time for the fall season. It could also be a great addition to a movie night for the upcoming live-action Lilo & Stitch film that Disney is currently working on. The film was first announced in 2020, but we have since learned the film is reportedly scheduled to land on Disney+ on May 10, 2024.

Be sure to snag your inflatable Stitch as soon as possible, as these huge Disney inflatables tend to sell out quickly. Happy shopping, Disney fans!