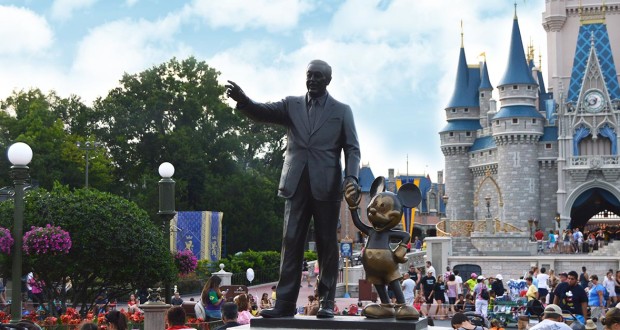 The 11 Most Dazzling Sights At Magic Kingdom In The Daytime

The Magic Kingdom at Walt Disney World in Florida is the most popular theme park in the world, with roughly 20 million visitors per year. There is a reason for that: attention to detail. The Disney imagineers have gone to great length to bring the details to life. At the Magic Kingdom, you can escape reality for the magical world of Disney! Come join me as we consider The 11 Most Dazzling Sights At Magic Kingdom In The Daytime! Do you have more?

1) Cinderella Castle – The most photographed icon in the world is Cinderella Castle in the Magic Kingdom! Whether it’s your first trip or your 101st, turning the corner in Town Square and seeing Cinderella Castle at the end of Main Street USA is just breathtaking! It’s so big and beautiful! Of course, you must take a picture; actually, you’ll probably want to take several. Some of the castle itself and then some with your family in the foreground. Ask a cast member or even another guest to take your family’s picture, or better yet, ask a Disney Photopass photographer to take your picture. Be sure to let them scan your MagicBand or ticket media afterwards. Then, when you get home, you can go on-line and decorate your picture with borders and other fun decorations. It’s a great way to remember your trip!

2) Main Street USA – Walt Disney spent his formative years in Marceline, Missouri. Although he lived there only a few years, it left a lifelong impression on him. When designing Disneyland (and later Disney World), the imagineers designed the main thoroughfare to resemble Walt’s hometown, circa 1905. *Spoiler alert: Although they look real, the storefronts are just facades. Nevertheless, this is an area you should linger in. Take special note of the store windows, which act as a sort of Disney hall of fame.

3) Partners Statue – At the far end of Main Street USA, near Cinderella Castle, is the Partners Statue, with Walt Disney and Mickey Mouse. Walt famously said, “It all started with a mouse!”, meaning all that we love and appreciate about the Disney company started with the idea of Mickey Mouse. Did you know Walt’s wife Lillian actually came up with the name Mickey, after Walt came up with Mortimer Mouse? Kudos to Mrs. Disney!

4) Avenue of the Planets – Granted, this entrance to Tomorrowland is even more impressive at night, with all the bright lights. However, it’s spectacular in the daytime also! It is supposed to be the 19th-century style future envisioned by French writer Jules Verne and the latest scientific discoveries. In this way, the land would not need to be continually changed like a Tomorrowland but have a sense of timelessness and fantasy. When it was updated in 1994, the Imagineers decided to Americanize that concept by re-making it into “the future that never was”.

5) Swiss Family Treehouse – From the 1960 Disney movie “Swiss Family Robinson”, this attraction is the ultimate treehouse! The attention to detail here is amazing! The tree contains about 300,000 fake leaves and the entire tree weighs 200 tons. Take time to observe all the “rooms”. This attraction has remained virtually unchanged since its opening in 1971.

6) Prince Charming Regal Carousel – One of Fantasyland’s original attractions, the carousel is a sight to behold! The imagineers found it in a shuttered theme park in New Jersey in 1967. It was restored for the park’s 1971 opening. The 90 Maplewood horses are painted with 23 karate gold leaf, silver and bronze. This attraction tells the “Cinderella” story, in 18 different scenes.

7) Splash Mountain – Whether you’re standing on the bridge outside this attraction or experiencing it yourself, you can tell this is a fun (and mildly scary) attraction. Arguably the most visually stunning part of Splash Mountain is the six-story plummet, near the end of your ride. Although you have just a second or two, notice how much you can see of the Magic Kingdom, before you plummet into the briar patch! Be sure to smile for the on-ride camera at the top of the summit; it’s on your left.

8) The Haunted Mansion – Located in Liberty Square, this mansion is designed in the English Tudor style of a Hudson Valley Mansion. Be sure to read all the gravestones in the queue and check out the horse-drawn hearse upon your exit. *Trivia: The hearse is the same one used at the beginning of the 1960 movie, “The Magnificent Seven”.

9) Hall of Presidents – Yes, this attraction is indoors, so it’s the same night or day. Nevertheless, it is certainly dazzling, if you are an American or appreciate American history. Where else can you see all 44 US Presidents gathered together in one room? Each of the presidents is introduced one at a time, from Washington to Obama. Washington, Lincoln and the current president all speak. If you are feeling patriotic, this show will give you goosebumps!

10) Beast Castle – *Spoiler alert! Although you can see the Beast’s castle, you never actually walk into what you see, but it sure feels like it! Just more Disney magic! Be sure to take a picture outside. Your friends and family back home will never know the difference. Once inside, this castle serves as a restaurant, with three different rooms from “Beauty and the Beast”. In the Grand Ballroom, you can watch snow falling outside the window. In the West Wing, watch petals fall from the enchanted rose. Finally, in the Gallery, you can see Belle and the Beast dancing.

11) Storybook Circus – This area is located in Fantasyland, in the place of the former Mickey’s Toontown Fair. It is the home of every youngster’s favorite attraction, Dumbo. The entire area is eye-popping! Filled with bright colors, circus posters and lively music, you will really feel like you just stepped into the movie.  As you enter this land, don’t forget to look down at the pavement – the circus animals have left behind their footprints, and the elephants even dropped a few peanut shells! 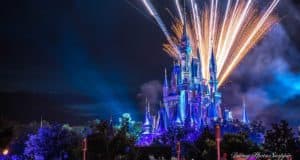 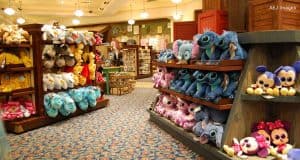 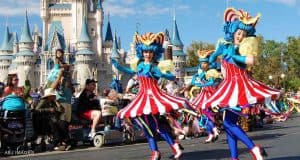