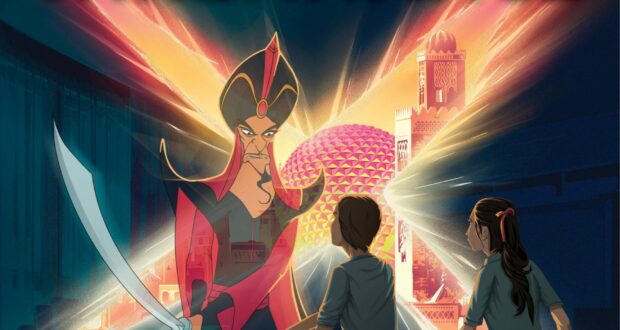 The Disney “Kingdom Keepers” Author Has A New Cover Reveal

For the average Disney fan, the prospect of an empty Disney park is always tempting. Ridley Pearson capitalized on this idea in 2005, creating an intricate behind-the-scenes look at Walt Disney World through the guise of a thrilling, action-packed adventure series–and now he’s back with more, including the cover reveal of the series’ latest installment, shown above! Even though Pearson already has his plate full with rewriting the entire series to suit modern Disney attractions, he’s still close to releasing the next book in the series, with plans to release a complete trilogy following the original Kingdom Keepers’ and Return’s plots.

The series is called “Kingdom Keepers: Inheritance”, and so it’s no surprise that the book will focus on the original Kingdom Keepers’ offspring. However, this book also presents a unique twist in that it takes place in a more futuristic setting: a diverse city surrounding Epcot. According to the synopsis, “sixty thousand people live in a CommuniTree surrounding the forward-looking Walt Disney World theme park. Five unique families are among the residents—and some of the parents were once known as the Kingdom Keepers.”

In an interview with Nerdist, Pearson cited a conversation that inspired his focus on the park: “Epcot’s World Showcase has maintained a grip on me since Disney first allowed me to visit for research at 4:30 a.m….Then the Imagineers shared with me Walt Disney’s original vision for Epcot: a futuristic city of sixty thousand where people from every walk of life would imagine, work and play. With my readers emailing me questions of the what the future held for the Kingdom Keepers, I began combining my curiosity with my research. The result is book one of Kingdom Keepers: Inheritance.”

Time will tell about the book’s specific plot, but the cover strongly suggests that it will include Jafar, the villain from Aladdin. Many Disney villains presented themselves throughout the original series, including Jafar, so it will be intriguing to learn how his role has grown! The Kingdom Keepers books have served as delightful entertainment for Disney fans for almost twenty years, and readers will be happy to see the story continue.