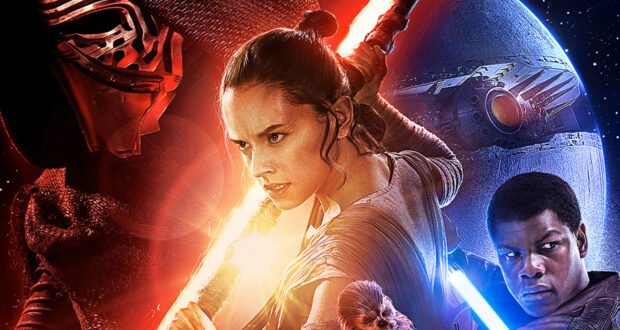 With so many movies and shows under its belt, the Star Wars franchise has become bigger than we ever anticipated. 12 movies, four canon animated shows and one live-action show (so far), means that there’s enough for you to undertake the ultimate Star Wars binge (ideal if you’re preparing for a faraway-galaxy themed pop quiz!).

It’s a lot to keep up with, though, and if you’re a bit confused as to where things fits along the Star Wars timeline, then don’t worry – we’ve got the ultimate Star Wars viewing guide! And we’ve even crossed all our BBYs and ABYs (‘Before the Battle of Yavin’ and ‘After the Battle of Yavin’ – with said-battle being the one that takes place in A New Hope).

Episode I: The Phantom Menace (32 BBY)

Episode I follows a young Obi-Wan Kenobi and his master Qui-Gon Jinn as they attempt to negotiate peace between the Republic and the Galactic Trade Federation. When they meet a very young Anakin Skywalker on Tatooine, they sense in him great potential to become a Jedi – and he might even be the ‘chosen one’ as foretold in a prophecy.

There are plenty of graphic novels that go further back than the first episode in George Lucas’ prequel trilogy, but in terms of television and film, The Phantom Menace is the official starting point. While it was released in 1999, 22 years after A New Hope was released, it is the first film in the series from a chronological point of view. 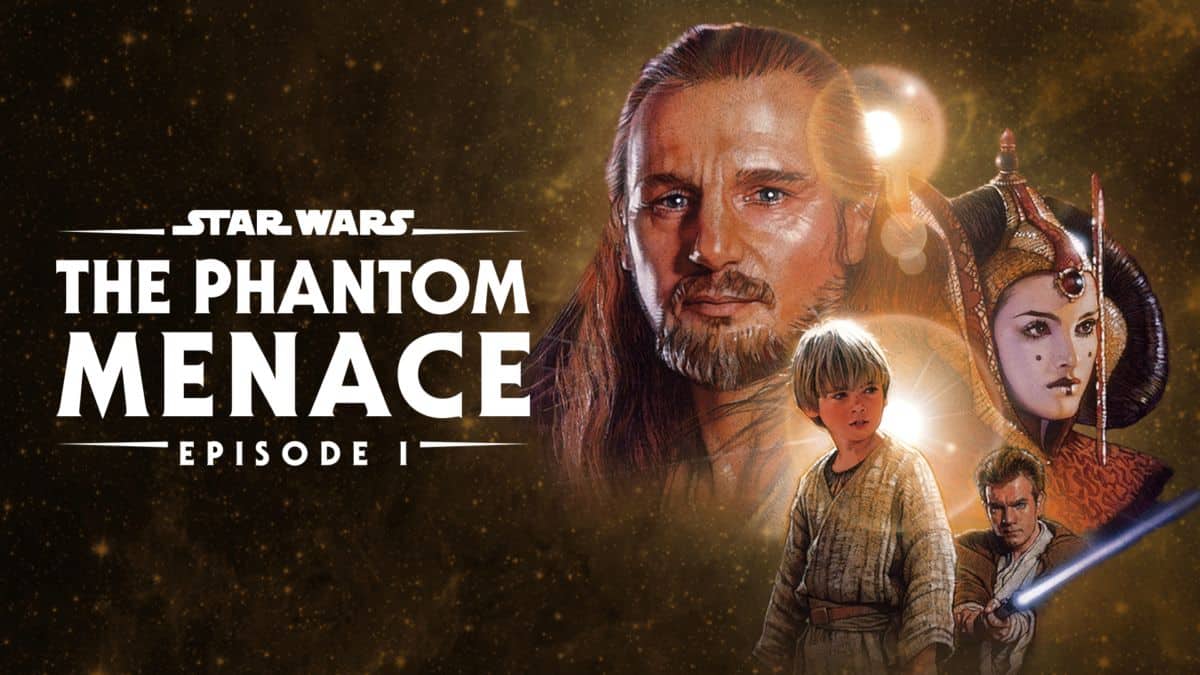 The second episode in the prequel trilogy sees Obi-Wan and his Padawan Anakin Skywalker learn about a clone army on the planet of Kamino, while a war brews between the Republic and separatists all across the galaxy. It also becomes clear that there’s an even greater threat at large, in the form of a mysterious Sith Lord known as Darth Sidious.

Attack of the Clones makes quite the jump from its predecessor (which is plain to see from the recasting of Anakin from Jake Lloyd to Hayden Christensen), which makes it the biggest in-trilogy time-jump out of all three trilogies in the entire saga. Nevertheless, this entry is the one that started the now-iconic Clone Wars era.

This critically-acclaimed show follows the Jedi and other pivotal characters during the Clone Wars. Among the main characters are Anakin Skywalker, Obi-Wan Kenobi, Padme Amidala and newcomer Ahsoka Tano, while other regulars include Yoda, Mace Windu and the clones themselves, with the likes of Rex and Cody being the figureheads.

The show – which includes the 2008 movie of the same name – spans the three years between Attack of the Clones and Revenge of the Sith, and the last two episodes overlap the last movie (while the final four episodes are a movie in their own right!). However, as the series isn’t listed in chronological order, you’ll need to use the official episode guide on StarWars.com.

The concluding chapter in the trilogy is the culmination of everything so far, and a tragic end to many stories and characters we’ve grown to know and love by this point. As the Republic falls and the new Galactic Empire rises, the galaxy is plunged into chaos, while Jedi Knight Anakin Skywalker moves one step too close to the dark side.

Revenge of the Sith has become something of a fan-favorite in recent years, perhaps even more so since the direction-less sequel trilogy came out. Episode III marks the end of the prequel trilogy era, although shows such as The Clone Wars and The Bad Batch do serve as extensions in their own right.

Star Wars: The Bad Batch follows Clone Force 99, a team of ‘defected’ clones – Hunter, Echo, Tech, Wrecker and Crosshair – who uncover the newly-formed Galactic Empire’s plot to rule over the galaxy. When all but Crosshair – who remains loyal to the new Empire – flee the cloning facility on Kamino, they are joined by young female clone Omega.

The follow-up to The Clone Wars begins just as Order 66 is about to strike, so it overlaps with the last two episodes of its predecessor and Revenge of the Sith. However, beyond the pilot, it occupies the months that follow the end of the Clone Wars. How far into the future this show will reach remains to be seen, but a second season is already underway.

Solo: A Star Wars Story follows a young Han Solo as he abandons his life as a slave with the hope of becoming the best pilot in the galaxy. It doesn’t all go to plan, though, as he winds up on the run, working for the Empire, undertaking heists for criminal syndicates and even being caught in a dangerous love triangle!

The spin-off movie takes place 10-13 years before the original trilogy, but perhaps the fact that Han Solo doesn’t look anything like Harrison Ford yet is the biggest giveaway! Solo spans three years (fleetingly), depicting the titular character’s life on Corellia, his time working for the Empire and ultimately, how he becomes the iconic smuggler.

Obi-Wan Kenobi will see the return of Ewan McGregor (who played the character in the prequel trilogy), focusing on his time in exile on Tatooine as he watches over a young Luke Skywalker from the hills. As Hayden Christensen is also confirmed to appear, it’s possible the show will feature flashbacks to the prequel trilogy or times thereafter.

The live-action show will take place 10 years after the events of Revenge of the Sith and 9 years before A New Hope, and is set for release some time next year on Disney+. Unlike The Mandalorian, Obi-Wan Kenobi will be a limited series, although it’s likely this will be reviewed subject to how many galactic credits the show ends up making!

The hit animated show follows a group of misfit characters who all have one common interest: taking down the Empire. They soon grow into the rebel cell that will give birth to the Rebel Alliance. The team includes Hera (a Twi-lek), Sabine (a Mandalorian), Zebb (a Lasat), Astromech Chopper, and two Jedi Knights, Kanan Jarrus and Ezra Bridger.

Star Wars: Rebels is considered a loose follow-up to The Clone Wars, as it brings back many characters such as Ahsoka, Rex and Bo-Katan. However, long ended are the Clone Wars, as Rebels is set five years before A New Hope, while the finale’s brief epilogue takes place one year after.

On first glance, it’s reasonable to assume that Andor is an unusual spin-off series, given that the character Cassion Andor dies in spin-off movie Rogue One: A Star Wars Story. However, fans seem to be forgetting that Obi-Wan Kenobi dies in A New Hope, and he’s also getting his own show that takes place a number of years before!

Andor has been confirmed to take place during the formation of the Rebel Alliance, five years before Rogue One: A Star Wars Story, which puts it around the same time as Rebels (so it’s possible we’ll see some characters from that show in live-action). It’s impossible to tell if the show will span the five years, but as it’s only 12 episodes, this is unlikely.

The first Star Wars spin-off movie centers on a group of rebels who are tasked with acquiring the plans for the Empire’s newly-built Death Star, so that the Rebel Alliance can destroy the weapon before any more planets are obliterated. However, even if the team succeeds, it’s a one-way mission.

Rogue One is as close to A New Hope as you can get, which is why it’s ‘0 BBY’ on the timeline, as it likely takes place weeks – perhaps even days – before the events of Episode IV begin. The film definitely feels like a pre-extension of the very first Star Wars film, and efforts were clearly made to help naturally bridge the two visually and tonally.

A New Hope, The Empire Strikes Back and Return of the Jedi form the very first Star Wars trilogy, whose main arc revolves around Tatooine farm-hand Luke Skywalker, son to Sith Lord Darth Vader, but ‘a new hope’ for the galaxy. As we follow Luke on his journey from Padawan to Jedi Knight, we meet all the original iconic Star Wars characters.

Seeing as there are no Star Wars TV shows that ‘interrupt’ the original set of films like The Clone Wars does with the prequels, we’ve decided to group these together as the ‘original trilogy’. It’s pretty straight-forward viewing, and as far as the passage of time goes, there’s a year between the first two films and another three between the last two.

The Mandalorian, The Book of Boba Fett & Ahsoka (9 ABY)

The Mandalorian follows bounty hunter Din Djarin as he faces a moral crisis when hired to collect a young child for the Empire. Its second season introduces Ahsoka Tano from The Clone Wars in her first live-action appearance, and fan-favorite Boba Fett, both of whom are also getting their own spin-off shows.

The Mandalorian is set five years after A New Hope, and the two upcoming spin-off shows have been confirmed to be set around the same time as the ‘mother show’. While it’s difficult to pinpoint the exact ABY for each of them, it’s unlikely they’ll be too spread apart from one another, so that they can allow for ‘crossover’ episodes and cameos.

Many fans tend to forget about Star Wars: Resistance, yet another animated show that’s canon within the Star Wars timeline. The show has an all-new set of characters, with budding starfighter Kaz as the lead, who is recruited by Poe Dameron to work for the New Rebel Alliance, to help in the fight against the First Order.

Resistance takes place shortly before The Force Awakens, and also during the rest of the sequel trilogy. It’s the furthest any animated Star Wars show – or any Star Wars show for that matter – has ever gone in the Star Wars timeline, with the exception of anime anthology series Star Wars: Visions, which isn’t really considered canon.

Disney’s sequel trilogy has a new Jedi at the centrefold, who shares similar humble beginnings with Luke Skywalker. But Rey must face a new threat – Kylo Ren and the First Order, successors to the long-fallen Galactic Empire. With the help of ex-Stormtrooper Finn, starfighter Poe Dameron and original Star Wars characters, Rey must face her destiny.

The sequel trilogy takes place a long 34 years after A New Hope, and though The Force Awakens and The Last Jedi are very close together, there’s a year between the second entry and the concluding chapter The Rise of Skywalker. As it currently stands, no material has ventured beyond The Rise of Skywalker, making it the farthest point in the timeline.

Seeing as we’ve included the upcoming live-action shows Obi-Wan Kenobi, Andor, Ahsoka and The Book of Boba Fett, this is the most comprehensive Star Wars viewing guide you’ll find. But until those shows arrive, be sure to start your ultimate Star Wars binge on Disney+ now – you’ve got a lot to get through!