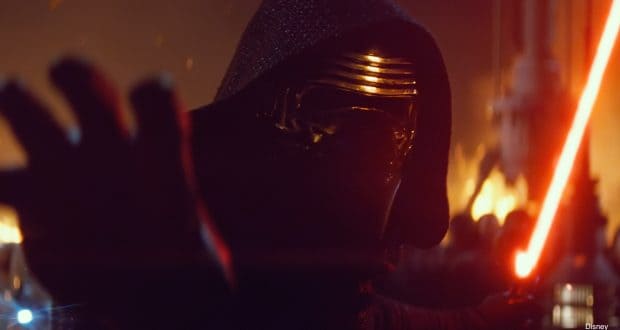 The Star Wars sequel trilogy might not have landed well with fans, but that doesn’t mean it isn’t filled with memorable moments. While some certainly stand out for all the wrong reasons (Luke and some freshly squeezed blue milk, Leia doing a Mary Poppins impression), there are some that have become etched into our minds because of their gravitas.

And there’s nothing more unforgettable than seeing Han Solo meet his maker in 2015’s The Force Awakens. His death was shocking for two reasons, with the first being that he’s Han Solo, one of the most iconic Star Wars characters ever who fans had been wanting to see return since 1983’s Return of the Jedi. The second? He was killed by his own son!

Or was he…? There’s an interesting fan theory that suggests Kylo Ren didn’t kill Han Solo. But you don’t need to rewatch The Force Awakens to see if you missed anything – we’re here to back up that theory, as there are a few solid clues that suggest Kylo is innocent (at least in this case). So let’s revisit that fateful moment…

After confronting his son, Han Solo tries to reason with him, telling him that he misses him and that he should come home (wherever that may be – does Ben Solo have his own room on the Falcon?). But desperate to prove himself a true agent of the dark side, Kylo kills his father with his lightsaber.

While we do see this happen, it’s difficult to determine exactly what happens in terms of who actually turns and activates the lightsaber. And it’s this ambiguity that really lends to the theory. Of course, it is indeed Kylo Ren’s lightsaber that kills Solo, but we don’t see him do it – even if we think we do.

So if Kylo Ren doesn’t fatally wound his father, then who does? This might come as a bit of a shocker, but some fans believe that it’s Han Solo himself who does it. Yes, it’s entirely possible that the fastest pilot in the galaxy turns the lightsaber on himself. But why…?

4. The exchange between the two is revealing

Let’s dive a little deeper into the conversation between father and son. Before we look at the altercation itself, examining the dialogue is crucial to understanding what may actually transpire between the two where the lightsaber is concerned. In fact, the conversation is peppered with some compelling evidence.

After Kylo Ren tells his father that he has “destroyed” Ben Solo, Han says to him, “Snoke is using you for your power. When he gets what he wants he’ll crush you. You know it’s true.” A visibly torn Kylo Ren replies, saying, “I want to be free of this pain. I know what I have to do but I don’t know if I have the strength to do it. Will you help me?”

Han says, “Yes. Anything.” We then see Kylo Ren withdraw his lightsaber, before Han grabs it. With both their hands on the hilt, the lightsaber moves towards Han, but it’s difficult to tell who’s turning it. And when the blade finally emerges and penetrates Han, Kylo Ren says, “Thank you.” If Kylo is the one who kills Han, why thank him?

Related: Does Time Travel Exist in the Star Wars Universe?

3. Han wants to protect his son from Snoke

On the other hand, why would Han turn the lightsaber on himself? Well, the answer might be a lot more obvious than you think. First of all, remember that he’s Ben Solo’s father. Ben Solo is Kylo Ren’s true identity – something his father reminds him of during their encounter. And let’s not forget that Han says he’d do “anything” to help his son.

Secondly, it’s possible Han knows that Kylo Ren may kill him, but doesn’t want his son left with the burden of having taken his father’s life. So for this reason alone it’s possible he turns the blade on himself before his son gets the chance. But there is a far more likely reason than this one, which simply involves keeping his son alive.

2. Kylo Ren is conflicted in all three movies

It’s not a stretch to say that Kylo Ren is a conflicted character. There are many moments throughout the trilogy where it seems that he doesn’t actually want to be bad. We first see this during his encounter with his father, Han Solo. While we know how that pans out, he’s still visibly conflicted beforehand.

And then there’s the scene in The Last Jedi, in which he’s about to fire at his mother Princess Leia from his ship. He hesitates and doesn’t end up pulling the trigger, although it’s hard to tell whether he would have, as he’s beaten to it by one of his Tie Fighters. Fortunately, though, Leia lives to fight another day.

Either way, we know Ben Solo loves his mother, because her death in The Rise of Skywalker literally brings him to his knees. Coupled with Han appearing as a ghost afterwards – whether it’s really a ghost or a memory – it’s plain to see that Ben loves his parents, which adds to the possibility that he could never have killed his own father.

1. The film was co-written by master of mystery J.J. Abrams

The last big clue is that J.J. Abrams co-wrote and directed Star Wars: The Force Awakens. Abrams is known for seasoning his films and TV shows with mystery and ambiguity, and while the two sequels completely lacked direction, that doesn’t change the fact that some solid groundwork had been laid for the first episode in the sequel trilogy.

It’s also difficult to believe that Abrams, along with the other two co-writers, Lawrence Kasdan and Michael Arndt, would kill off such a beloved and iconic character without good reason. It’s very likely that Han Solo’s death was supposed to be followed up in the subsequent films. Unfortunately, though, we may never know “who shot first”.

Kylo Ren remains one of the more complex and interesting characters in the sequel trilogy, and maybe he’s yet to be explored further – there are even rumors of him getting his own trilogy. However, while Daisy Ridley has shown an interest in reprising her role as Rey Skywalker in future films, Adam Driver is yet to confirm anything.