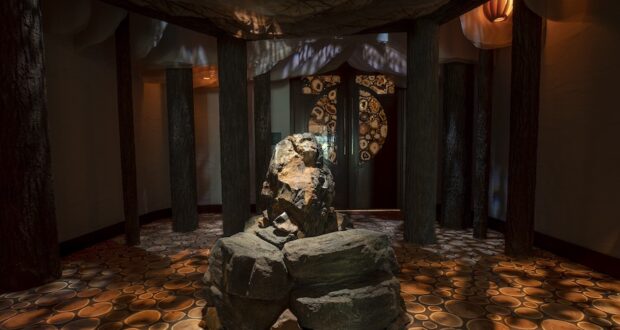 There’s A New Spa in Disneyland

Even though most Disney Guests associate a Disney vacation with rides, attractions, and characters, there’s also plenty of relaxation and pampering to be found at Disney resorts! Disneyland’s Grand Californian Hotel & Spa (a resort on par with Disney World’s Grand Floridian when it comes to luxury) is unveiling its brand-new Tenaya Stone Spa on September 16, and Disney Guests will want to be first in line for the Disney-magic-infused treatments! 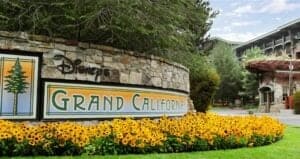 Disney never skimps when it comes to treating Guests, and there’s going to be plenty of options at the Tenaya Stone Spa. First up, there’s the Purify & Refresh Body Treatment, which will include a “sea salt exfoliation, warm milk nectar wrap, purifying peat mud and [an] emollient, oil-infused massage lotion”. For anyone who’s looking for an extra glow to their skin, the Wild Honey and Mud Body Renewal Treatment uses red clay and micro-pumice to exfoliate, followed by a “peat mud nutrient mask, fruit serum, and an oil massage”. If you’re looking for a full-body reset, try the Avocado Body Treatment: the “dry brushing, whipped shea sugar exfoliation, nourishing mask, and scalp, shoulder and foot massage” will leave you completely rejuvenated! Facials, massages, and foot treatments will also be offered; you can even do a couples massage!

Although the spa’s visitors might be more focused on the luxuries that they’re about to experience, Disneyland is also encouraging its Guests to really slow down in the spa and observe the thought that went into its design. Disney’s iconic team of Imagineers teamed up to create a 6,000-square-foot-wide spa that was based around both “the spirit of nature” and the “indigenous cultures of California”. They were also inspired by the overall aesthetic of the Grand Californian Hotel itself! 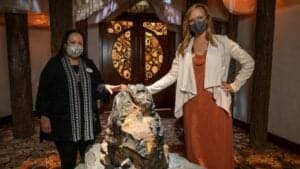 Katrina Mosher, one of the art directors from Walt Disney Imagineering, and Dawn Jackson, one of Disney’s Native American cultural advisors, both spoke about the detail that went into the spa’s architecture. According to Jackson, “‘tenaya’ can be interpreted [as] ‘to dream’ in the indigenous culture of the Yosemite Valley”. Katrina emphasized that a main focus in the spa’s creation was that it would “fit well within Disney’s Grand Californian Hotel, melding in nature, the Craftsman experience and a California story”. However, as a high-end spa in a luxury Disney resort, it also goes without saying that it “needed to be a modern day spa, with contemporary elements”.

As a cultural advisor for Disney, Jackson spent a lot of time working “with tribal elders to look at California heritage”. She looked into everything from “the ancestors to their “tools” and the kinds of stone that would be used in construction; then, the Imagineers tried to incorporate that knowledge into their plans and use it to inform their design choices. Although Dawn Jackson looked into the history of several indigenous tribes from the area, most of her efforts ended up being “focused on the Southern Sierra Miwok”.

When it came to the actual “materials” that were used to construct the Tenaya Stone Spa, the specific Tenaya stone (pictured above) also really “went on a journey”. According to Jackson, “We were looking for it with a Miwok elder and her family, who are descendants of Chief Tenaya of the Ahwahnechee people. The stone revealed itself and this Miwok family blessed it and gifted it to us. This stone has been shaped and formed over eons of time on earth. It is the center and the heart of the spa – and a place to reflect and set intentions”.

Although Jackson’s statement sounds like it’s encouraging Disney Spa Guests to look inward, Mosher also noted that the hotels’ Craftsman architecture “has you look “out and up,” such as looking out across landscaping and up at the trees”. The spa serves as a unique juxtaposition to the outward-looking hotel that surrounds it. There’s also a lot of references to “the ‘powers of four’ in the spa’s layout, which is “found throughout many indigenous cultures of the world”. According to Mosher, some examples include “four directions, four colors, four elements and four points of wellness”. Keep an eye out for references to this sacred number during your visit! 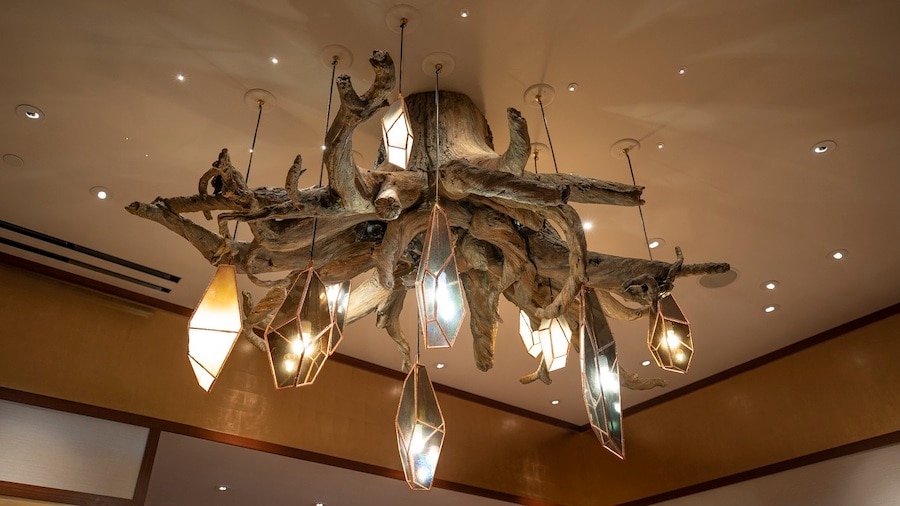 While looking inward at the spa, it might also behoove Disney visitors and Grand Californian Hotel Guests to look up at the ceiling for a moment. Katrina Mosher encourages visitors to admire the “tree root chandelier, because tree roots go down and into the earth and soak up water, which represents our water element”. The “obsidian” material and unique “pendants” on the chandelier will also be conversation-starters.

Guests should also take a moment to enjoy the relaxation lounge, which is specifically “on the east side, where the sun rises”. Its signature stained glass window “represents beautiful sun rays coming into the room”, and “a trickling water feature has a vein of gold running through the mineral rock”.

Just as Guests should be reflecting inward and looking up, the Imagineering team also encourages everyone to look down sometimes. This is specifically to appreciate the unique wood floor, which is made up of “wood rounds” that allow you to “literally see the life of the tree and what is inside of it”.

Although the Tenaya Stone Spa doesn’t open until next week, appointments can be made in advance for massages, manicures, pedicures, and the body treatments mentioned above! You can also visit the boutique, appointment-free! Keep in mind, however, that masks are still required throughout your visit. Have you ever been to a Disney spa? Are you excited to try the Grand Californian’s unique take on relaxation and luxury?