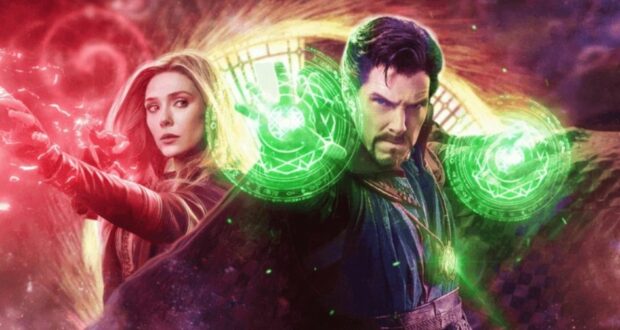 Move over Super Bowl LVI! Marvel Studios has dropped a new official trailer for the highly-anticipated Doctor Strange in the Multiverse of Madness… and it’s as impressive as we had hoped.

Marvel fans haven’t been able to keep from talking about the upcoming Doctor Strange sequel. So far we know the film titled Doctor Strange in the Multiverse of Madness will welcome back the talented Benedict Cumberbatch as he stars as Doctor Stephen Strange.

The icing on the cake for us is when we learned that Marvel’s Wanda Maximoff (played by Elizabeth Olsen) who we watched closely in the 2021 Disney+ original series WandaVision, will be joining Doctor Strange through this new adversary. Wanda (AKA “Scarlet Witch”) makes the film anticipation all the more exciting!

Now, minutes before the official Super Bowl kick-off on February 13, 2022, Marvel Entertainment released a brand new trailer that is as EPIC we hoped it would be.

In Marvel Studios’ “Doctor Strange in the Multiverse of Madness,” the MCU unlocks the Multiverse and pushes its boundaries further than ever before. Journey into the unknown with Doctor Strange, who, with the help of mystical allies both old and new, traverses the mind-bending and dangerous alternate realities of the Multiverse to confront a mysterious new adversary.

RELATED: Is Doctor Strange An Imposter?

The film is directed by Sam Raimi, and Kevin Feige is the producer. Louis D’Esposito, Victoria Alonso, Eric Hauserman Carroll, and Jamie Christopher serve as executive producers. The screenplay was written by Michael Waldron.

Ready to enter a new dimension of Strange? Watch the official trailer for Marvel Studios’ Doctor Strange in the Multiverse of Madness below:

Not only did Marvel drop a new trailer, but check out the new film poster below:

Marvel Studios’ Doctor Strange in the Multiverse of Madness will launch its debut in theaters on May 6, 2022. Is anyone else marking their calendars for a May 6 theater visit?