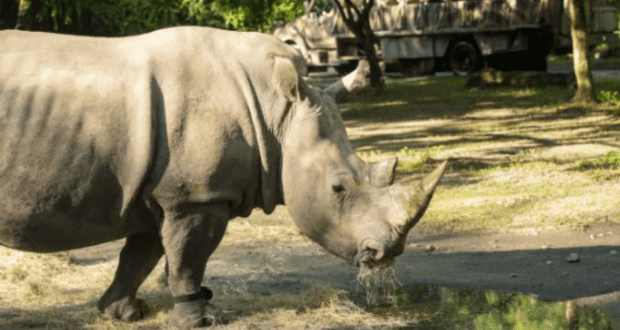 Disney’s Animal Kingdom is home to a number of unique species of animals that Guests can see on walking trails and attractions like Kilimanjaro Safaris. As part of caring for the park’s many animals, Disney works with the Association of Zoos and Aquariums (AZA) to gather new data and insights that can support these species both at other organizations around the country and in the wild. One of the ways that Disney has been working to learn more about the park’s rhinos has been through ‘trackers,’ similar to our own fitness trackers.

Related Post: Disney Expands Its Efforts to Save Rhinos

The Disney Parks Blog shared that similar technology that counts human steps and tracks activities is being used to collect data on the activity levels of rhinos. Select accredited institutions around the country have been working together to gather this research, and you can see this data collection happening firsthand during a ride on Kilimanjaro Safaris if you happen to come across any of the rhinos sporting trackers. The rhinos’ activity trackers will give Disney’s Animal, Sciences, and Environment team details about how these animals move throughout the day. Through the tracker, Cast Members will be able to see how much distance the rhinos cover while moving around the savanna, as well as details of their sleeping and nap routines. The trackers will also provide insight into the areas of the savanna where the rhinos prefer to spend most of their time as the trackers are GPS enabled. It is becoming increasingly important for Disney’s Animal Kingdom and other AZA-accredited organizations to learn more about rhinos as their numbers in the wild are decreasing largely due to poaching. Data like the information gathered from Animal Kingdom’s new trackers, however, will help organizations find ways to support rhinos in the wild and they will be an important part of increasing rhino populations.

In addition to taking a ride on Kilimanjaro Safaris, you can see rhinos in Disney’s Animal Kingdom by opting to book the backstage tour, ‘Up Close With Rhinos.’ The tour takes Guests behind the scenes of Animal Kingdom’s rhino habitats where they can speak with the Cast Members who work with the animals and get a closer view of them.