The Baby Rhino Recently Born at Disney’s Animal Kingdom Officially Has a Name!

Disney’s Animal Kingdom has been a leader in white rhino births under the Association of Zoos & Aquarium’s Species Survival Plan, with three rhinos having been born within a recent 13-month period. The most recent of these babies to be born at Animal Kingdom has been spending time bonding with her mom Lola backstage at the Disney theme park. She will continue to stay backstage for some time while Disney’s Animals and Science team of Cast Members continue to monitor her progress.

Once she has grown enough to where this baby white rhino will be comfortable joining the “crash,” or herd, of rhinos , she will be moved to the savanna where Guests will be able to see her from the safari trucks at the Harambe Wildlife Reserve with Kilimanjaro Safaris in just a couple of months. In the meantime though, we are excited to share that the youngest rhino currently at Disney’s Animal Kingdom officially has a name! The youngest calf has officially been given the name Logan, in homage to her parents’ names with her dad being Dugan and her mom, Lola. Naming Logan after her parents was a sweet move by Disney’s animal care team, especially as Lola is a first-time mom!

Rhinos are considered a near-threatened species, and every birth at Disney’s Animal Kingdom is monumental in terms of further promoting conservation and education efforts surrounding the success of rhinos in the wild. 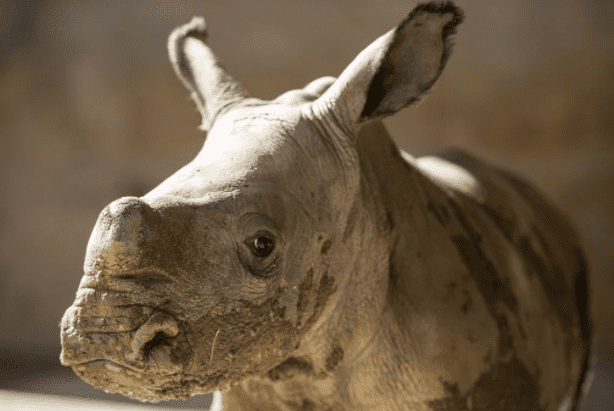 For more ways to learn about rhinos at Disney’s Animal Kingdom, we recommend reading up on and donating to the Disney Conservation Fund or booking an Up Close With Rhinos experience during your next visit! This unique Disney park program offers a closer look at these incredible creatures and talks with Disney’s animal specialists so you can learn more about rhinos both in the park and in the wild. The program was put on hold due to COVID-19 and is coming back early this year, but booking for it is open now on disneyworld.com.