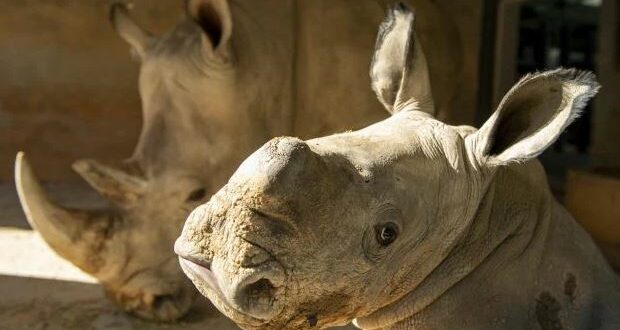 This baby rhino is the third white rhino born at the theme park over the last 13 months, and is the 13th white rhino born in total at the Walt Disney World Resort. White rhinos are a near threatened species in the wild, so while the Disney Worldwide Conservation Fund does work with organizations that support rhinos in their natural habitats, it is also very exciting news for the conservation world to have had so many successful births take place at the park.

Unfortunately, the white rhino’s numbers have dwindled in the while largely due to poaching. In their natural habitats, they are too often hunted for their horns. Rhino births therefore are incredibly important for the conservation of the species, so programs like the breeding success in Disney’s Animal Kingdom and the work of the Disney Worldwide Conservation Fund that work to support their habitat monitoring and restoration are vital to their survival. Rhinos like then the newest baby in Disney’s Animal Kingdom are the result of 16 to 18 month long gestation periods, and as the second largest land mammal in the world they usually weigh about 140 lbs. when they are born. This new baby rhino will be spending some time backstage bonding with mom Lola before heading out to the Harambe Wildlife Reserve where Guests will be able to see them both while riding Kilimanjaro Safaris.