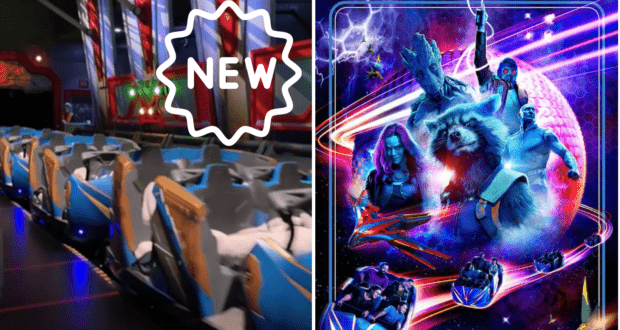 Guardians of the Galaxy: Cosmic Rewind is the newest attraction to arrive in EPCOT taking Guests on an adventure with favorite characters from the hit Marvel Cinematic Universe franchise. The all-new roller coaster will be located in the new Xandar pavilion and it will include first of its kind technological advancements and is already receiving impressive reviews from those in the know who have had sneak peeks.

Today, Walt Disney Imagineering shared a first look at the load station for Guardians of the Galaxy: Cosmic Rewind– Check out the video below:

The all-new coaster is set to be a family-friendly thrill ride, and is being promoted as the longest enclosed coaster anywhere in the world, located in what EPCOT Guests will recognize as the former Universe of Energy pavilion. It will also be the first time an attraction inspired by the Marvel Cinematic Universe will be making an appearance at Walt Disney World outside of some temporary stage shows previously offered during select EPCOT festivals. The new Disney coaster attraction has some star power behind it as well with Academy Award-nominated actress Glenn Close reprising her role as Nova Prime, the leader of Xandar and commander of the Nova Corps in Guardians of the Galaxy . Before Guests board the attraction, they will walk through the Xandar Gallery, where they will learn more about Xandar ian culture and history before setting off for the adventurous new attraction. While on the attraction, Guests can expect to see characters like Rocket, Groot, Gamora, Drax, and of course, Star-Lord from innovative brand new ride vehicles. You may eve income across Starblasters, Nova Corps vessels and more!

Guardians of the Galaxy: Cosmic Rewind should be ready to open by Memorial Day weekend (thanks to some accidentally leaked opening details noted here), and we cannot wait to see it for ourselves!