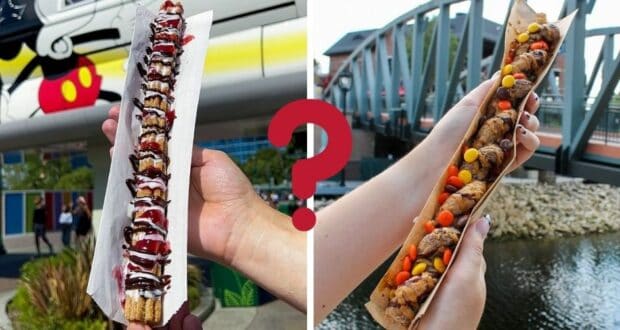 It’s National Churro Day soon, on June 6, and both Downtown Disney and Disney Springs have asked Disney fans and Disney World or Disneyland Guests to recommend some new, limited-time churro flavors as part of the celebration. Now, the votes have been tallied, and Disney Parks has announced which limited-edition churros will become part of two eateries’ menus for part of June!

The results are in! Thanks to your #NationalChurroDay votes, these limited-time churro flavors will be available June 6 through June 12!

The two new churro flavors will be available at Sunshine Churros in Disney Springs and California Churro in Downtown Disney. There were three different options in the poll presented to Disney fans for each of the two churro establishments. The options for voters for Sunshine Churros were the Double Chocolate Churro (which was predicted as a likely winner), the Peanut Butter Lovers, and the unexpected Golden Dragon Churro (which is a churro version of a Blue Ribbon Corn Dog created by the general manager of Sunshine Churros, and includes both Panko and sriracha mayonnaise).

For California Churro votes, the options were the Caramel Apple Churro, the Mint Chocolate Churro, and the Chocolicious Strawberries and Creme Churro. Peanut butter and chocolate is always a classic pairing (although the Double Chocolate Churro was expected to dominate anyway), and we cannot be surprised that strawberries and chocolate were an appealing pair for voters too.

Which of these two winners do you think will be your favorite? Are you headed to a Disney Park that is near either or both churro eateries this June (since they will only be available in Disney Springs and Downtown Disney between June 6 and June 12)?