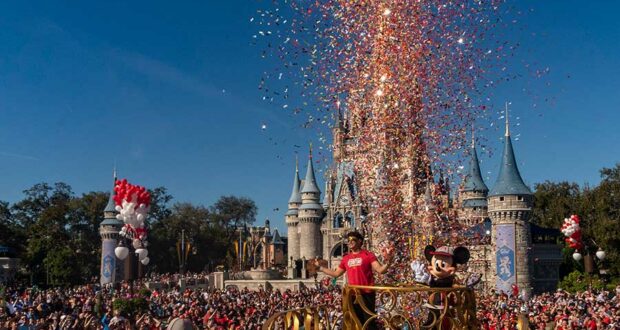 What Started the Tradition of the “I’m Going to Disney World!” Super Bowl Ads?

Super Bowl LVI is coming up quick on February 13, 2022, and while we’re still waiting to find out which teams will be facing off at the big game, there is one thing we are definitely looking forward to already- the classic “I’m Going to Disney World” ad! 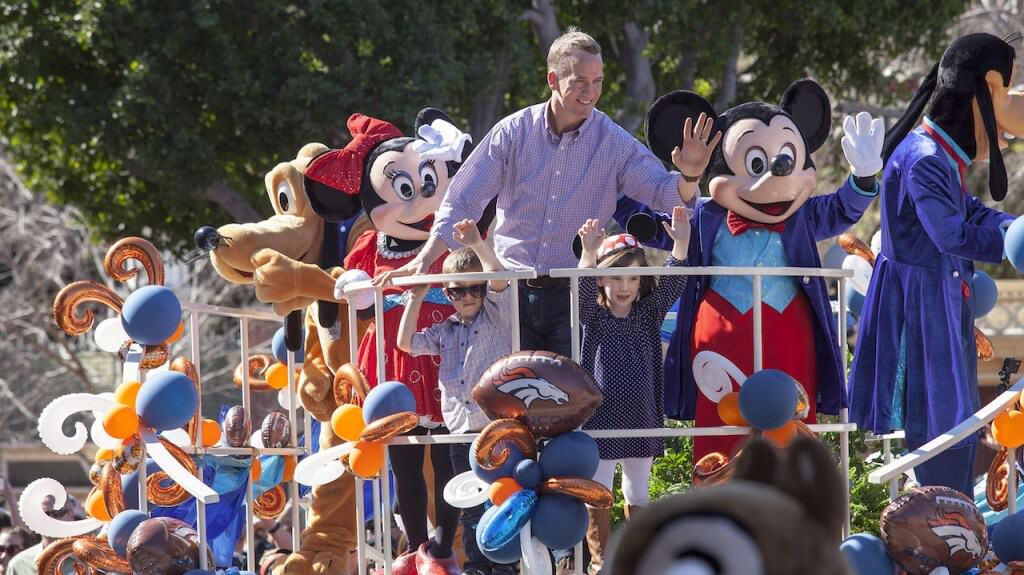 The ad is now a tradition that many football and Disney fans cannot imagine the Super Bowl without at this point, but there was indeed a time when it was an entirely new idea. If you’ve ever wondered how this fan-favorite ad came out, and what happens when the winning MVP indeed does, “go to Disney World,” we’ve got you covered:

It was then CEO of the Walt Disney Company Michael Eisner who first dreamed up the idea for the memorable ad in 1986. While most known for launching the “Disney Renaissance,” an important part of Eisner’s time as CEO (1984-2005) was advertising Disney parks and products to a variety of audiences. (If you happen to have an old free vacation planning DVD or…VHS…from this time, you might noticed the extra focus on promoting Walt Disney World to couples and older adults along with kids and families.) 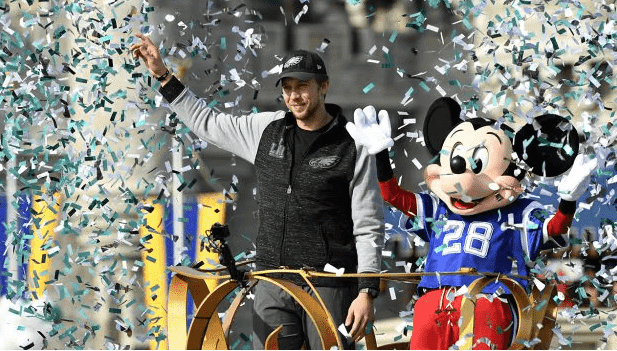 Eisner was in the middle of working with Imagineers on plans for Disney MGM Studios (that would open three years later in 1989) when he and his wife Jane Breckenridge (Eisner) were at a dinner with George Lucas, as well as Dick Rutan and Jeana Yeager (the aviation duo known for being the first to fly non-stop around the world.)

During this dinner, the group was discussing the aviation accomplishment and Eisner asked the two, “Well, now that you’ve accomplished the pinnacle of your aspirations, what could you possibly do next?” Rutan smiled and replied, “I’m going to Disneyland!” 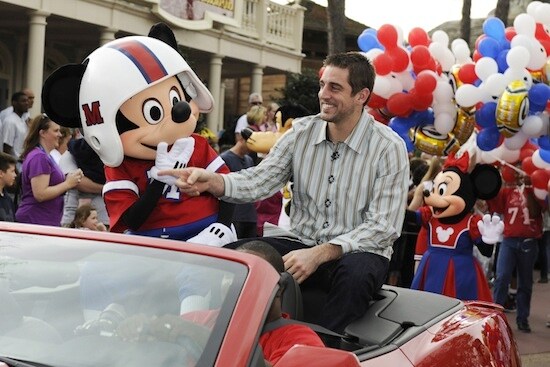 Later Eisner’s wife Jane recalled moments of conversation from dinner and shared the idea that “I’m going to Disneyland!” could easily make up a new marketing slogan for the Walt Disney Company to use in upcoming promotions.

The following year, Disney officially launched the “What’s Next” campaign as the “I’m Going to Disneyland” ads are technically called. The first football player to participate was Phil Simms, MVP and quarterback of the New York Giants, who said the line for Disney’s ad following a win against the Denver Broncos at Super Bowl XXI. 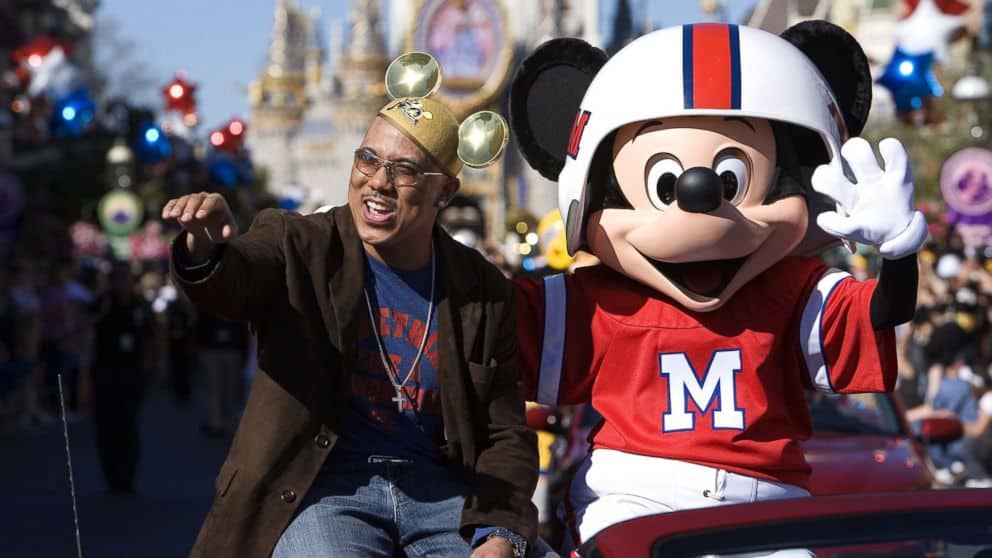 Simms later admitted some apprehension over doing the ad, however he was talked into it by his colleagues, and we’re glad for that! The logistics of the now famous commercial are rather fascinating, as the player is told to say the line when asked the question, “You just won the Super Bowl, what are you going to do next?” but it is otherwise unscripted and filmed live in the moment. Disney’s camera crew is waiting to rush the field and capture the exchange during the live celebration. The song, “When You Wish Upon a Star” is added very quickly in post production so the ad can air almost immediately after it’s shot.

Two takes are shot, one with the MVP saying he’s going to Disneyland and one saying Disney World. Which one you see on TV depends on where you are watching the game from, as Disney uses the same retargeting for this commercial as they do other ads. Which park the players actually go to however varies, though it typically just depends on which park is closer to the game.

The Super Bowl winning MVP is usually the player featured in the ad campaign, but this isn’t always the case, and while the entire team does not usually go to the Disney park, any member of the team is welcome to attend the quick trip to either Disneyland or the Magic Kingdom. 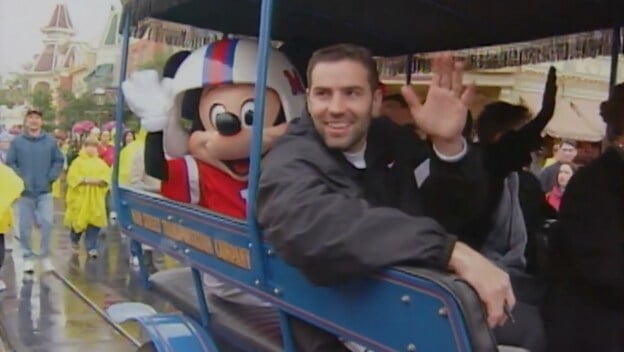 In most cases, if someone other than the MVP is shown in the ad or takes the trip, it’s because the MVP passed the opportunity onto them. Tom Brady did this for instance following Super Bowl LI when he was named the MVP but he passed the Disney experience on to James White since he made the touchdown that won of the game.

In other rare cases, someone other than the MVP is chosen in the first place to participate in the ad. Baltimore Ravens linebacker Ray Lewis for instance was the winning MVP of Super Bowl XXXV however due to controversy surrounding his murder trial a year earlier, quarterback Trent Dilfer worked on the ad campaign instead.

Whoever is featured in the ad is under no official obligation to actually go the parks, as long as some representative from the team is present the contract with Disney is fulfilled. Who wouldn’t want to go though? The players who do visit either Disneyland or Walt Disney World are reportedly compensated an estimated $30-70k depending on the parameters of their specific media visit. 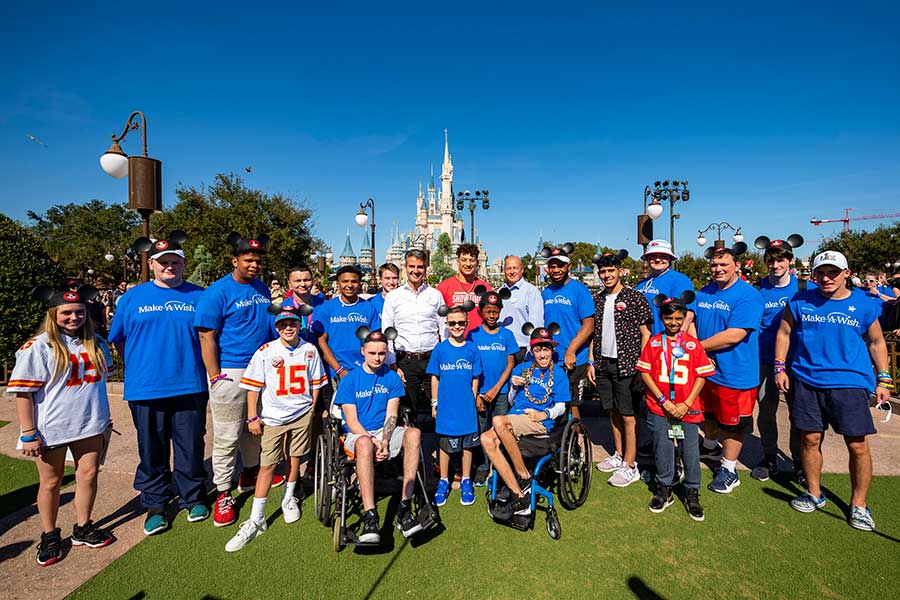 As far as their trips go, we have to note that these are not “real” Disney vacations. They are very quick visits that last for hours or maybe at times a full day, but with so many other celebratory obligations taking place after the Super Bowl the entire trip is over very quickly. Often times the day includes a parade through the Magic Kingdom or Disneyland and visits to new attractions so Disney has footage of the players experiencing new areas of the park to use for their own advertising.

Sometimes Disney also works with Make-A-Wish to grant a unique set of wishes during the Super Bowl celebrations. Most recently, Patrick Mahomes, Kansas City Chiefs MVP from Super Bowl LIV, was joined by 17 children from Make-A-Wish on his visit to Walt Disney World. The parks portion of the wish, was an extension Disney granted on the kids’ original wish of attending the Super Bowl. That year, Disney also made a donation of $1 million to Make-A-Wish in honor of Mahomes as part of Disney Parks’ role as the presenting sponsor of the Super Bowl MVP ceremony. 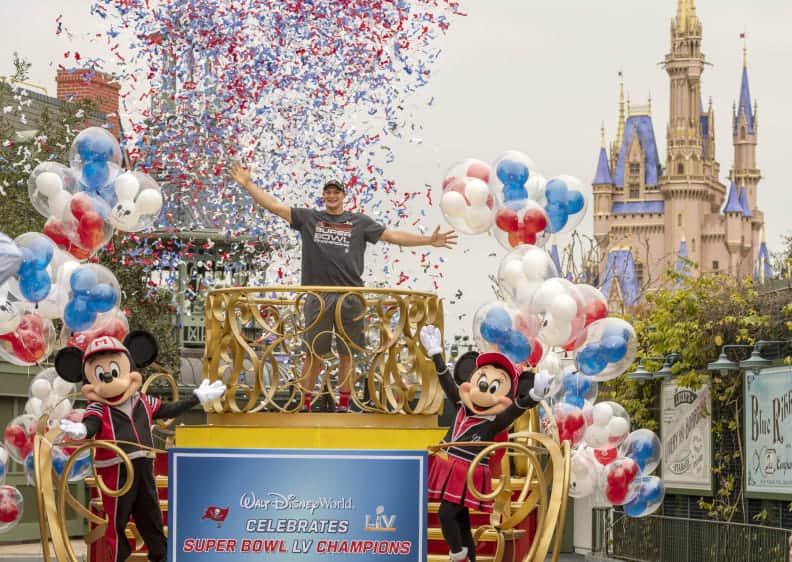 The only year that was without a Super Bowl parade since the tradition started was 2021 due to the COVID-19 pandemic. Following the Tampa Bay Buccaneers victory, Rob Gronkowski and Tom Brady visited the Magic Kingdom where instead of a parade, promotional photos were taken from entirely backstage. During this time, masks were still required in all public areas of Walt Disney World, and the above maskless photo of Gronk caused some stir on social media (and it seems to have been removed from Disney’s official channels as a result.)

The parade really is filmed in front of ordinary Guests however (the same goes for the parade that takes place for the winning team of the World Series) so if you happen to be at the right park at the right time, you may see some of your favorite athletes!