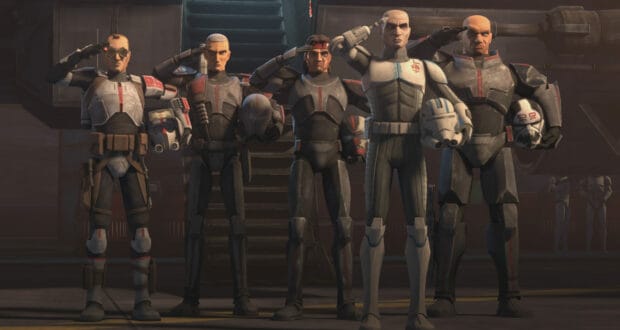 Who Are the Bad Batch?

Star Wars: The Bad Batch will be joining Disney+ on May the 4th in honor of Star Wars Day 2021, but exactly are the bad batch? Hunter. Tech. Crosshair. Wrecker. Echo. This is experimental unit Clone Force 99 that make up The Bad Batch.

The Bad Batch was first seen in Star Wars: The Clone Wars and each of them have their own skills that they bring to the group. Let’s take a look at what StarWars.com says about each of these troopers.

Hunter is the leader of the group and is known for keeping his cool in tough situations. Hunter was engineered with heightened senses, making him an expert tracker.

Tech is the techie who is extremely talkative and a computer whiz. His skill is a gift with science and technology allowing to him do things like go through data to opening locked doors and so much more.

Crosshair is the team’s quiet pragmatic sharpshooter. Although he might second guess authority, he always has the team in mind when doing so.

Wrecker and Echo (CT-1409) are the last two team members. Wrecker is the team’s muscle where Echo (the newest member) is a former ARC trooper and is half-droid, half-clone.

The Bad Batch will watch as this team comes together to determine where they fit into the new Galactic Empire.