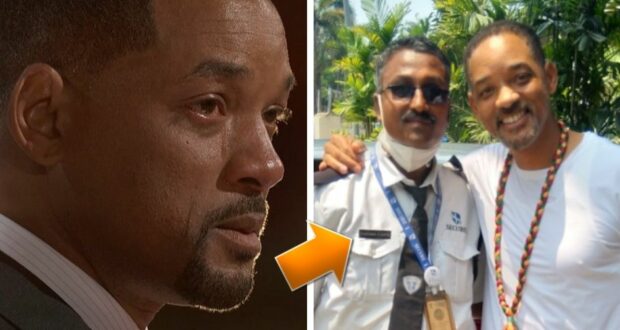 Will Smith showed up in India after the 'Oscars slap' incident.

Will Smith Heads to India ‘For Spiritual Purposes’

After the debacle at the 94th Academy Awards in March (which involved Will Smith slapping comedian Chris Rock live and onstage), actor and Oscar-winner Will Smith seems to be stepping away from the limelight. The Aladdin actor has now been spotted, however, arriving at a private Mumbai airport in India.

According to PEOPLE, “the actor traveled to India for spiritual purposes, to practice yoga and meditation” after the Oscars slap.

Actor Will Smith has been open about his focus on spiritual health and spirituality, especially in his new memoir Will (which was published in 2021), so a spiritual retreat in India is not particularly surprising since the actor is now facing controversy and backlash after hitting Chris Rock. Onlookers in the Indian airport reported that King Richard actor Will Smith “seemed to be on a spiritual visit as he was accompanied by a robe-clad monk wearing a rudraksh (religious beads) necklace.”

Many fans seem certain that Will Smith has indeed gone to India for “a spiritual visit”, especially since a source told PEOPLE something in that vein, but some people also believe that the Oscar-winner is in India specifically to connect with yoga guru Sadhguru Jaggi Vasudev.

Will Smith and the guru Sadhguru (who is a famous guru and who created the Isha Foundation, which is an “ashram and a yoga retreat” near Coimbatore in Tamil Nadu) have met before; the pair shared an Instagram video of their meeting in 2020 when Sadhguru Jaggi Vasudev was biking through America. You can also see their meeting below!

Although King Richard actor Will Smith might be coming to India for spiritual guidance, meditation, and yoga retreats, he might not be able to speak with Sadhguru Jaggi Vasudev specifically and the Academy Award winner may have to consult with “other senior gurus”. According to Sadhguru’s Instagram account, the spiritual healer is currently biking across Europe to raise awareness about soil erosion and the damage that soil erosion causes.

Will Smith has been to India before, particularly while shooting The Bucket List in 2019. The actor just won the Oscar for King Richard and has worked with Disney on a few notable occasions (including Aladdin, in which he played the Genie, and his National Geographic series on Disney+). However, several of his projects have been put on hold after the incident at the 94th Academy Awards.