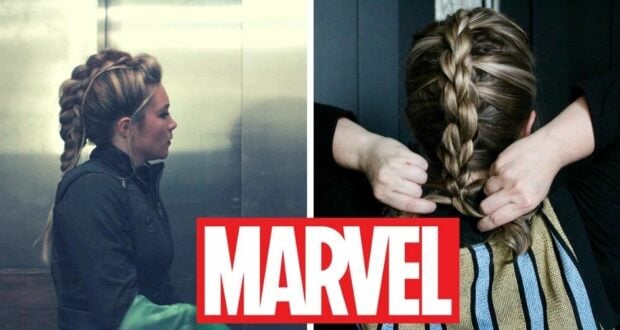 Sure, most Disney fans probably spent most of the 2021 movie Black Widow admiring the fighting moves or superhero landings of Natasha Romanoff and Yelena Belova — and the same goes for Yelena during her return in the Disney+ series Hawkeye — but the Black Widow assassins were also sporting some stylish braided hairdos during their fight scenes, and many Disney fans noticed! Marvel has clearly caught on to Disney fans’ interest in the Black Widows’ braided hairstyles, particularly the braids of Yelena (played by Florence Pugh), because Marvel Entertainment has just released a hair tutorial based on one of Yelena’s looks.

Marvel shared the tutorials with a Tweet saying “Yelena Belova: deadly assassin, loyal sister, and style icon.  Learn how to recreate her iconic braids from Marvel Studios’ #Hawkeye!“. In the tutorial itself (which focuses on recreating the braids that Yelena is showing off during the final episode of Hawkeye on Disney+), Marvel says “here’s a how-to guide to help you recreate [Yelena’s] four-part round and fishtail braid for your first trip to New York, meeting a new friend for macaroni, or ideally both!

The instructions for the “Yelena Belova-Inspired Round and Fishtail Braid” (which is by Lauren Murray and features a combination of two styles) begins with creating a “front poof” by gathering hair above your forehead, twisting it, pushing it forward slightly, and securing it with bobby pins. You can see some of Lauren’s specific tips to enhance the look with flyaways and a comb in the full tutorial.

Although braiding in general takes practice, the next steps involve taking a small amount of hair from the right side of the front poof and braiding it into a small fishtail braid (which is similar to a Dutch braid). Try to keep the braid tight and small for contrast against the main braid to come.

After that round raiding on the right side, repeat on the left side; according to the instructions, you should continue to “move that first left section under the next two adjacent sections, and then wrap the first section over the third section”.

Now you’ll just continue braiding your hair, thinking Yelena thoughts about macaroni and cheese or avenging Natasha all the while, but you’ll add more loose hair as you’re proceeding little by little, “similar to braiding a French or Dutch braid”. Keep the braid as tight as you can and try to take some time adjusting the braids in the process so that there are no visible bumps.

Once you’ve gone far enough down the back of your head, you can continue braiding until shortly before the ends of your hair. Then, use an elastic to tie the braid, and tug the braid very gently to enhance its volume. Now you’re ready to share comedic banter with Kate Bishop and fight your way through some bad guys in style! Is this Disney princess style? Perhaps not — but it’s certainly fierce, and you didn’t even need any hair product! Add some natural makeup and a leather jacket to really channel Yelena.