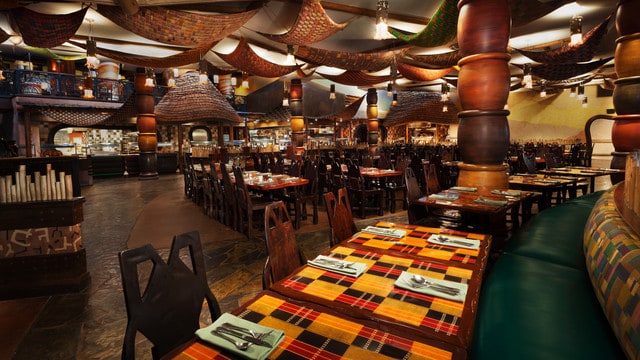 For the Mexican food-loving vegetarian or vegan, La Hacienda de San Angel is the ultimate answer. Located in the Mexico Pavilion within Epcot’s World Showcase Pavilion, this waterfront dining spot boasts quite a couple of meat-free meal options on the menu. What’s more, two of their famed vegetarian favorite entrées can even be made with vegan specifications. They are the Enchiladas de Vegetales dinner, which comes as vegetable corn-filled tortillas topped with melted cheese and salsa ranchera and the Tacos de Vegetales plate of grilled vegetables and black beans topped with queso fresco and chipotle aïoli on flour tortillas. On the children’s menu, vegetarians may also be interested in such items like Cheese Quesadillas or Macaroni & Cheese with cavatappi pasta and white cheddar. There are also several delicious desserts to consider as well.

Many people tend to overlook the quick service dining options at Disney’s two water parks—Blizzard Beach and Typhoon Lagoon. Yet the fact is, both locations boast a number of enticing eats you wouldn’t expect, including an array of vegetarian and vegan items. You will find quite a few delightful dishes at Typhoon Lagoon’s Leaning Palms including their Vegetarian Sausage Rice Bowl, Black Bean Rice Bowl, and the Plant-based Picadillo Rice Bowl in addition to their Plantain Black Bean Burger, Vegan Wrap, Tropical Salad, and plain cheese pizza (for vegetarians who eat dairy). Lottawatta Lodge at Blizzard Beach also boasts its own vegetarian/vegan selections. These include Plant-based Rice Bowls with roasted tofu; the Beyond Vegetarian Burger, which is served with vegan chipotle mayo, lettuce, tomato, and cherry pepper; the Beyond Bratwurst Sandwich, with sauerkraut, mustard, and cherry pepper, and even Vegan Pizza with vegan mozzarella and allergy-friendly crust.

More than ever before, Disney World resort hotels offer a wide range of diverse dining accommodations to guests, including those with special dietary requests. So the vegetarian or vegan visitor will have no difficulties in finding fare fitting to them, regardless of where they opt to stay. One resort that we’ve found plenty of meatless meal options at in particular is Disney’s Animal Kingdom Lodge. With the many African and Indian influences in cuisine choices at the resort’s several onsite dining establishments, meat-free eating comes pretty easy here. Even the Mara—the resort’s primary food court has varied options available for breakfast, lunch, and dinner. And because buffets in general dish up a whole host of profuse possibilities, it goes without saying that any vegetarian or vegan would find numerous options at Boma as it is. Still, they have specific highlighted entrée selections featured here specifically for those who do not eat meat, like Vegan Waffles, Tofu Scrambles, and other breakfast bites upon request and delightful dinner fixings that include Couscous, Tabouleh, Lentil Stew, and more. Sanaa dishes up such vegan varieties as Aloo Masala, Cilantro-Coconut Vegetables, Chickpea Wat, Lentil Dahl, and so much more. Then it’s on to Jiko—The Cooking Place, Animal Kingdom Lodge’s famed signature dining option. Here masterful chefs have even comprised a specific vegan menu with all the same award-winning cuisine crafting and flavorful offerings you’d expect.