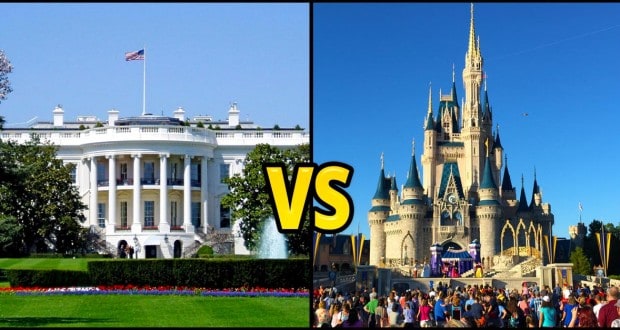 10 Things The Government Could Learn From Disney Efficiency

There’s no doubt that the Disney Parks have the best efficiency in the business. Operations are clearly defined and when there are slight hiccups, those issues are addressed immediately. Disney has a tendency to just do things right and we admire how everyone involved can keep such a massive company in such great shape. Unfortunately, Disney is not the Supreme Law of the Land here in the U.S. (a total bummer!) but we think there are some things our federal government could learn from Disney about staying efficient.

10. Liven up C-SPAN A possible reason why we aren’t too passionate about the government is because channels like C-SPAN that are there to get us involved in the daily politics are dreadfully boring! C-SPAN could really benefit from a Disney makeover! Whether you love, like, tolerate or detest Disney, they know how to produce the hits. If they were to liven up C-SPAN, maybe more people would be getting involved in the future of our country.

9. High standards of professionalism Disney has a reputation for impeccable professionalism at every level from Custodial Cast Members to Face Characters up to the Disney execs. Cast Members have to follow the rules and if they are found to be breaking these rules, they can be replaced with ease. Politicians tend to lie and bend the rules on a regular basis, characteristics that the WDC would never tolerate. A company that prides itself on excellent customer satisfaction would never allow its employees to act like politicians. Take notes Congress!

8. “The Happiest Place On Earth” As I just said, Disney prides itself on professionalism at every level. At WDW in Orlando, every time I have gone, the Cast Members have all been so friendly and accommodating to every guest. Many Cast Members truly do enjoy their job in the parks, which might not be the case for most politicians. Maybe if we gave Washington D.C. a tagline similar to “The Happiest Place on Earth” politicians would be more eager to please their constituents.

7. Quick fixes in emergencies On occasion, a Disney attraction will break down and need repair. Instead of ignoring the problem or dancing around the issue, the Imagineers get to work to fix it as quickly as possible so their guests are satisfied. I understand a lot more goes into the workings of Congress than fixing a loose bolt on Space Mountain, but Disney has come to realize that there is no sense shutting down the entire park to fix a minor issue. It only delays procedures, loses money and makes guests upset.

6. Disney goes all out It’s easy to see when you first arrive at a Disney Park that the WDC doesn’t do the bare minimum. They go all out to bring joy to everyone through their incredible knack for detail, spectacular shows and savory gourmet foods. Sometimes the U.S. government doesn’t seem like it’s going all out in some areas we feel need that energy. Oftentimes we see them doing the bare minimum, and we get it. There’s a ton of things they have to do, but Disney can teach them that putting more effort into something makes it more rewarding for everyone involved.

5. Always moving forward The WDC has a wonderful history that we won’t soon forget. They have a legacy that will always be cherished, but Disney has also realized the best way to be efficient and productive is to move forward. Things can get pretty stagnant in D.C. as politicians are reluctant to embrace possibilities for the future. Like at WDW, things can’t stay the same forever because society is always changing. The WDC is doing several things right now that I am extremely angry about, but I realized they are making these changes to stay a step ahead of the curve and these changes are being made for the future generations, not just me.

4. Always “in the black” In FY2014 The Walt Disney Company made nearly $50 billion. In FY2014 the U.S. national debt increased by $758 billion. I know the WDC is an entertainment company and not responsible for running an entire nation, but they seem to always be “in the black” by the end of the fiscal year. Disney knows how to make money, and the government knows all too well how to spend it. Maybe the U.S. government should produce a mega hit like “Frozen” to help pay off the $17 trillion debt?

3. Better public image The WDC has a better public image than the federal government. The company always looks like it has it all together, which might not always be the case. However, their public image compared to the governments makes Disney look like the golden child. It’s hard to be efficient when the government is busy addressing all of the negative press. Instead of wasting time and energy refuting the media’s accusations, perhaps buckling down and working out the issues at hand is the better way to go. This could possibly affect their public image for the better, but they can always call Disney for help if needed.

2. Whistle while they work If it worked for Snow White, it can work for Congress. We’ve all seen how quickly things get clean during a catchy number as Snow White gracefully tidies the cottage. Cinderella and Giselle from “Enchanted” were also pros at efficient cleaning with the help of singing. Imagine how much Congress could get done in one session if they only whistled while they worked! That’d be one way to liven up C-SPAN!

1. Hand over tasks to Disney What it all comes down to is the government has too much on their plate, and there are many tasks that would be better performed in the private sector. They just refuse to let go of the reigns. The best way the government could be more efficient is to relinquish control of some aspects and give it to Disney. If they can run multiple amusement parks around the globe, produce music, film and television and create consumer products, I’m sure there is at least something the government could give them to do to help lessen their load.