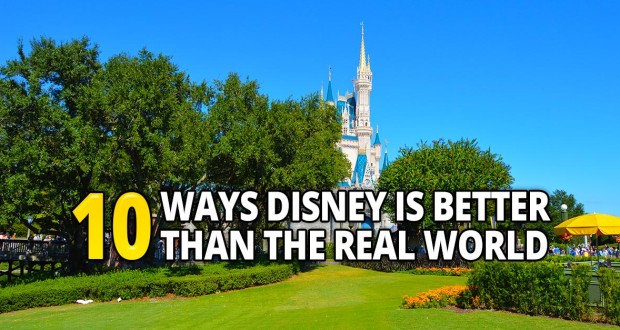 10 Ways Disney Is Better Than The Real World

Disney will always be better than living in the Real World. I’m not just talking about the theme parks. I’m talking about all things Disney! Even just watching my favorite childhood favorites helps me escape my mundane everyday life. There are a few things that Disney just does better than anything our Real World can offer. Here are just a few of our reasons why Disney is superior to the Real World.

10. Amazing Customer Service The service in Disney parks is impeccable. Everyone is always so friendly and ready to help you. Disney prides itself on its friendly atmosphere which is made possible by its Cast Members. We know all too well that terrible customer service runs rampant in the Real World. Employees can be rude, impatient, irritable and snarky – all traits that magically disappear inside Disney property. Friendly Cast Members keep Disney the Happiest Place on Earth!

9. Socially Acceptable Singing From what I’ve learned in my many years as a Disney fan, randomly breaking out in song is socially acceptable. Belle’s entire town broke out into song, Ariel belts out her longing to be part of our world, and little Simba just can’t wait to be king! No matter the occasion, singing at random times and places is just something that happens inside Disney! I break out into random song as I meander the aisles in the grocery store. It ends up in disapproving looks of confusion and pity. People in the Real World just don’t take kindly to your musical expression of your feelings, so don’t count on a myriad of happy townsfolk to join your rendition of “Prince Ali.”

8. Better Weather Orlando has a habit of small showers throughout the day, but even though it might be raining the weather doesn’t affect the Magic Kingdom like it does the Real World. When it rains in the Real World, we just want to curl up in bed and forget the day ever happened. Rain makes us gloomy. Why shouldn’t it? It messes up our hair, forces us to lug around umbrellas and causes a stressful driving experience. However inside the magic of Disney, rain doesn’t bother us in the same way. We just throw on that poncho, not giving a single care about our hair and off we go to Space Mountain! A little rain won’t keep us lying apathetically in bed when there are princesses to meet!

7. Perfect Style Within the realm of Disney, there is an unwritten rule that states that every character will have perfect hair and outfits by the end of the movie. As a child I always dreamed that my hair would be as perfect as Aurora’s golden locks, but upon reaching adulthood in the Real World I came to realize that the rule would never apply to me. Getting the perfect ‘do and outfit in the Real World is much harder because we don’t have a Fairy Godmother to conjure up the most elegant pale blue gown we’ve ever seen. Even Simba grows into a majestic mane in the end, and I can’t even get my hair to stay curled for more than an hour. I’d gladly leave the Real World just to get that perfect Disney hair and gown!

6. Expedition Everest The Real World inspired the Expedition Everest ride, but Disney does it way better! For starters, we climb all the way to the top of Mount Everest in a matter of seconds at Disney. In the Real World, that feat would take months if you could even make it. Disney also improves on the Real World’s Everest by taking out that pesky freezing weather. I’d love to go see the real Mount Everest one day, but I’ve realized that it gets extremely cold in Nepal. Disney brings Everest to me so I can comfortably sweat in the stifling Orlando heat and sip on an ice cold lemonade. This is how Everest was meant to be enjoyed. Oh, and it’s a roller coaster. When the Real World builds a fun coaster that takes me to see the Yeti, give me a call. Until then, I’ll be enjoying Everest as it should be enjoyed – sitting in a ride while wearing shorts and a tank top.

4. Epic Montages In the Real World we are always faced with times that we wish we could just lump together in a few quick seconds, but sadly we must endure every moment of them. Disney magic is able to bend the laws of space and time in ways our magic-less Real World can’t. Just take a look at Mulan and Hercules. Mulan is ready for war in three minutes when in reality it’d take us months to accomplish that level of skill. Hercules also trains and gets a year’s worth of workouts done in five minutes! If only I could get my body ready for summer in only five minutes!

3. Chores Done By Animals We quickly learn that food won’t serve itself despite what Lumiere tells us. We also learn that laundry won’t fold itself, floors won’t mop themselves and furry friends won’t come to our aid when we are cleaning your home. All these chores pile up in the Real World and it could take us a full day to get them all done, whereas in Disney it only seems to take a few minutes. I don’t know how many times I’ve begged my cats to help me with the chores, but I do know every time I ended up doing it by myself as my cats silently judged me.

2. Fireworks Every Night Disney literally goes out with a bang every night. There is a huge fireworks display in the sky regardless of the weather conditions. In the Real World we can only have fireworks on two occasions: Independence Day and New Years. Even then, sometimes the celebration gets cancelled because the ground is too dry. Disney continuously blasts off their impressive fireworks because every day in Disney is a day to celebrate with colorful explosions in the sky.

1. Mickey Mouse Disney has Mickey Mouse who started the magic. Without this little mouse there probably wouldn’t be Disney. Do we really need to say more? It’d be a mighty sad world without the magic of Disney giving us an escape from the Real World. As Walt Disney said, “Always remember that this whole thing was started with a dream and a mouse.” The final score: Disney -10, Real World -0.