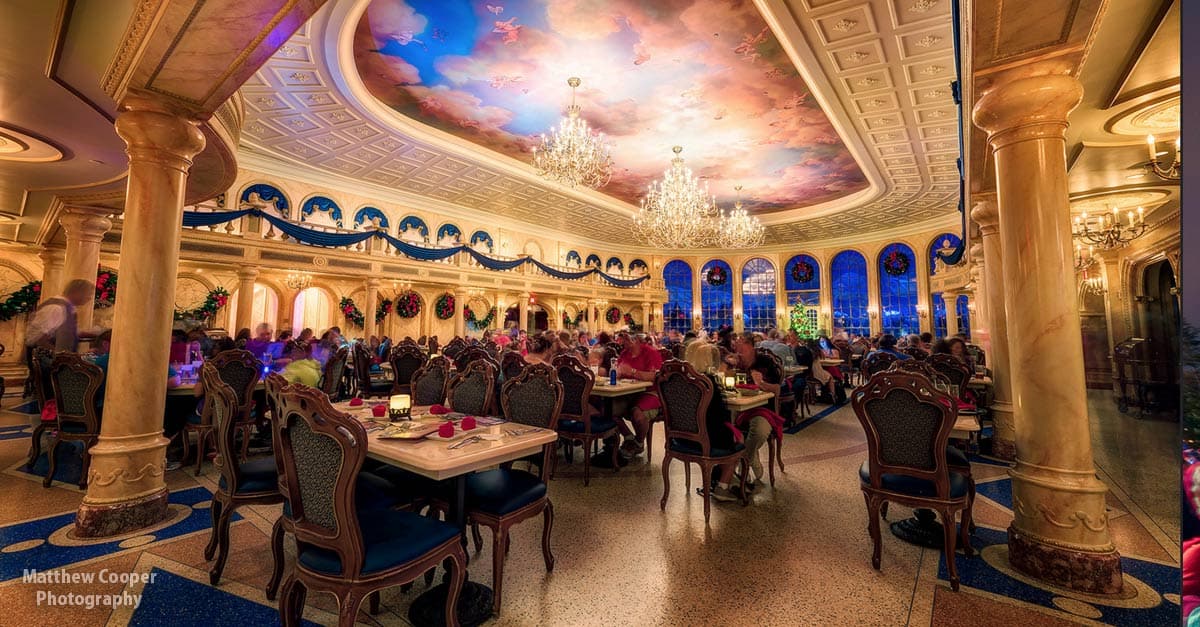 10. An enchanted new chapter to learn from

While Cinderella Castle still stands as the most iconic symbol of the Magic Kingdom, the more recent

Fantasyland expansions have cast a new light on many other Disney Princesses as well, most notably Belle from Beauty and the Beast. From the creation of Beast’s Castle, new places to eat like Be Our Guest Restaurant and Gaston’s Tavern, and the audience-interactive new attraction Enchanted Tales with Belle, visitors are learning more than ever before about this book-loving princess. To take part in Enchanted Tales with Belle guests are led into Maurice’s cottage where they can glimpse a little insight into Belle’s personal life growing up.

This includes such details as growth markings Maurice made on the wall each year to record Belle’s height, a portrait of Belle and her mother reading together, and of course the plentiful collection of her favorite books, exceeding more than 12,000 titles. All the fun points of reference to observe make even the queue for this interactive pursuit an overall enchanting experience that really turns the page on a whole new kind of adventure. Then for the main feature, guests are magically transported to the day when Belle and the Beast fell in love, with various audience members called on to participate in recreating the story by playing various roles.

9. To be a guest at Be Our Guest Restaurant

As previously mentioned, there are a number of beastly beauties that have been incorporated into the newer Fantasyland expansions. These include two premier Beauty and the Beast-themed food establishments, most notably the Be Our Guest Restaurant. Standing out as one of the latest in-demand and arguably most unique dining spot in all of Magic Kingdom Park, Be Our Guest Restaurant boasts stunning décor, a vast menu loaded with one-of-a-kind features, and even doubles as both a quick service stop for breakfast and lunch and a table service mealtime destination during dinnertime. What’s more, the restaurant holds three elaborately themed dining rooms to choose from—The Rose Gallery, The Grand Ballroom, and The West Wing.

As an architectural marvel of elaborate breathtaking beauty from floor to ceiling, you’ll no doubt notice the array of pretty but somewhat peculiar details all around, including those unique statuesque creature hybrids like the “golions” (part goat, part lions) near the entrance way. Likewise, above the door there appear to be “sneagles,” or rather eagles with snake tails. And on the bridge leading up to the restaurant there are six stone figures, all oddly enough referred to as “Frank.” This name was given to them during the designing phase for the restaurant as a simple if not somewhat random way to identify them. Another fun fact to observe is in the hall with all the armored knights lined up.

If you stop and listen a moment you just may hear them talking. Just spending time in this place will key you in to the many enchantments all around, including one torn painting in particular of the Prince that periodically transforms into the beast! And getting back to the food on one final note, as mentioned previously Be Our Guest Restaurant functions as a quick service option for breakfast and lunch. Guests place their orders at a kiosk and are then given a “magic rose” to take with them to their tables. The roses work their magic by sending a signal out so that the wait staff can locate guests to bring them their specific orders, wherever they are seated.

8. A sea full of submerged secrets

We already mentioned how the rarest Hidden Mickey in all of Magic Kingdom Park can be found at the queue of the Under the Sea ~ Journey of The Little Mermaid attraction, but did you know there are also several other fun secrets floating just below the waves? For instance, older Disney World visitors will undoubtedly remember the previous 20,000 Leagues Under the Sea attraction, which existed on this same spot until the early 90s.

Well, if you happen to be standing in the queue at a time and date other than noon on November 18 then there’s something else to be on the lookout for—an imprint of the legendary Nautilus submarine in the rock formations. While the tides have changed, the former currents of the previous attraction still flow through this more recent aquatic adventure, literally. For when the former 20,000 Leagues Under the Sea closed, cast members bottled some of its water and kept it for 18 long years. Then, during the opening ceremony for Under the Sea ~ Journey of The Little Mermaid the bottled water was poured into the water of the new attraction in a sort of symbolic merging of the tides.