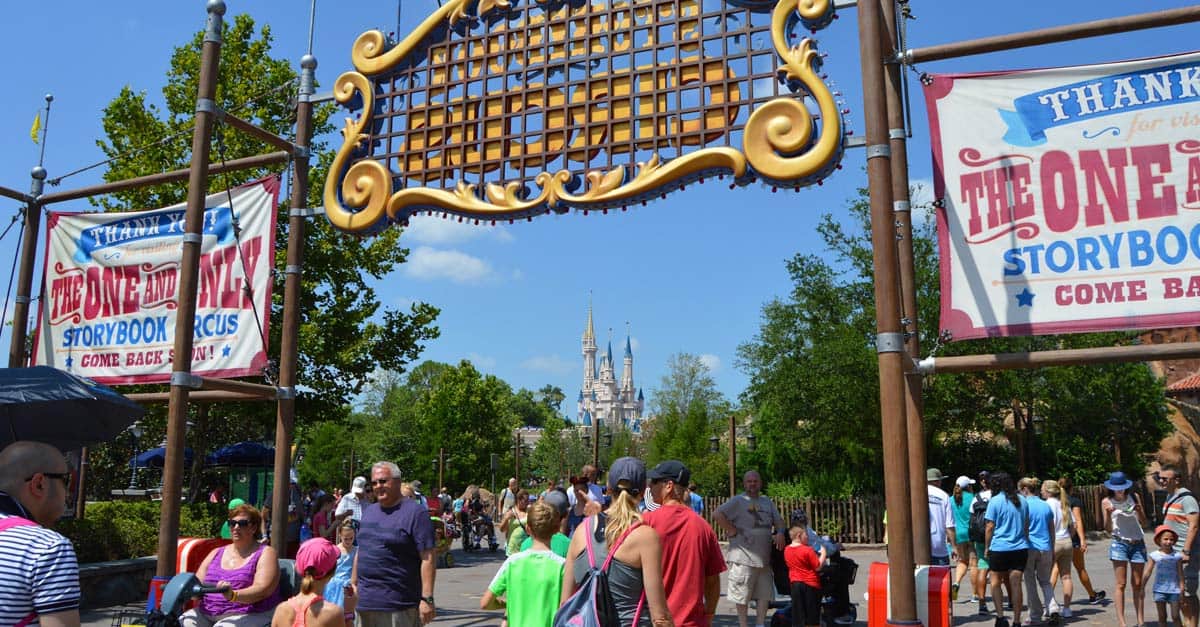 One longtime Fantasyland favorite shop is Sir Mickey’s—a quaint little store that, like everything else Disney, follows a particular theme and storyline. The backstory here is a compilation of two separate Mickey Mouse cartoon classics—The Brave Little Tailor from 1938 and Mickey and the Beanstalk from 1947. While each story is different, both feature Mickey Mouse and Willie the Giant, and the nods to both tales are ever present in the theming and décor inside and outside. As you approach the shop you will notice the beanstalk vine growing all through the building. But also take a look at the store’s sign, which features a tailor Mickey Mouse along with other tailored references in the window like fabric, shears, sketches, threads, and other supplies. Inside the shop, the vine from the outside is still running through, and you will see Mickey Mouse walking along it holding a lantern.

See if you can spot Willie the Giant peeking in, holding up the roof to the shop, on his quest to find Mickey. Prior to becoming Sir Mickey’s in 1996, this store followed a couple other themes over the years. It originally opened back in 1972 as Merlin’s Magic Shop and featured magician merchandise and magic tricks. By 1986 it was reimagined as Mickey’s Christmas Carol, selling Disney holiday merchandise before closing 10 years later to become what it is now.

No doubt fans of Dumbo the Flying Elephant will recognize the significance in the name of “Storybook Circus” for the section of Fantasyland that celebrates Disney’s classic cartoons and zany fair fun, but what’s up with Storybook Circus being setup at Carolwood Park? What is Carolwood Park? To make a long story short it’s quite simply a hidden historical reference that pays homage to Walt Disney’s personal love for trains, and one train in particular—his very own first steam-engine model railroad from his backyard on Carolwood Drive in 1950. Named “the Carolwood-Pacific Railroad,” this 1/8-scale model railroad was the precursor and inspiration for what was to become the Disneyland Railroad and by extension the eventual inspiration for the Walt Disney World Railroad. So this little nod and tribute to Disney’s railroaded interests within Fantasyland is a most appropriate choice.

You’ll find carnival-like attractions to delight you and excite you all throughout Storybook Circus. And one interactive character experience in particular provides the perfect blend of classic nostalgia and pure enjoyment by way of modern standards—Pete’s Silly Sideshow. This is the place to come and see some of Mickey’s friends take on entertaining circus roles. Witness the wonders of “The Astounding Donaldo” as he charms snakes, “The Great Goofini” as he performs harrowing feats as a stuntman, “Minnie Magnifique” renowned poodle trainer, and “Madame Daisy Fortuna” as she awes audiences with her impressive fortunetelling abilities.

Pete’s Silly Sideshow is not without its own handful of fun side notes and trivia. For starters, turn your attention to the calliope up front. The music you hear coming from it was authentically created from a set of antique circus crank organs. The instrument also references the old 1953 animated short Toot, Whistle, Plunk and Boomas well as Disney’s first CinemaScope cartoon Melody Timefrom 1948. And on one final fun trivia note, while the “Pete” character referenced in Pete’s Silly Sideshow remains a recognizable character by most Disney fans, did you know that he is actually the oldest continuing Disney cartoon character of all? He made is debut in 1925 in Walt Disney’s Alice Solves the Puzzle short—three years before Mickey Mouse came along.