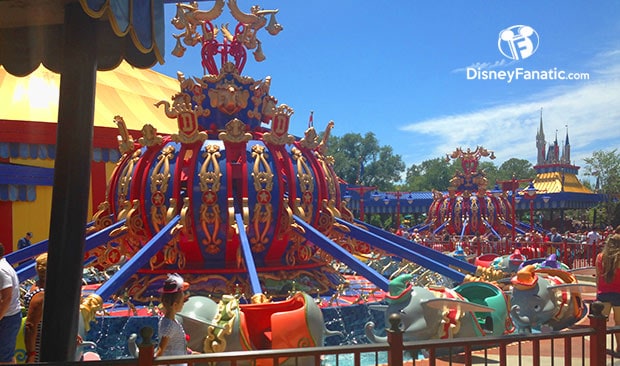 The Great Goofini’s Barnstormer is a well-loved kiddie coaster that packs just the right amount of dips, dashes, and thrills for smaller guests who may be getting their first taste of rollercoaster excitement. While the ride’s duration is only about a minute, the goofy history behind this Goofy-themed ride is pretty interesting. Before Goofy previously crash-landed at Wiseacre Farm, this area was the site for Grandma Duck’s Petting Zoo. In operation from 1988 to 1996, this petting zoo area was a part of what was then Mickey’s Birthday land and featured an array of animals, including the famous Holstein cow Minnie Moo, who was famous for sporting a Hidden Mickey on her side. She was later moved to Fort Wilderness when the petting zoo area was disbanded to make way for Goofy’s Barnstormer at Wiseacre Farm.

This new kiddie coaster followed the theme of Goofy teaching an airplane flying school with guests being along for the ride within Goofy’s homemade biplane. This theme carried from 1996 through 2011 when, with the Fantasyland expansions underway, the ride was re-themed as its current attraction—Great Goofini’s Barnstormer. Here are a couple of fun facts to note about this ride. First, the name “Barnstormer” was one of three attractions at Disney Parks named for previous attractions at the former Opryland USA amusement park in Nashville, Tennessee. The other two are Hollywood Studio’s Rock ‘n’ Roller Coaster and Grizzly River Run at Disney California Adventure Park. Second, guests looking for an interesting past attraction reference can find it if they look carefully behind the sign at the ride’s entrance. There is a grouping of letters that once spelled out “Wiseacre Farm” that were recycled and repurposed for this current coaster.

Dumbo the Flying Elephant is a classic integral attraction, and you’ll find a version of it located within each of the six Disney Parks throughout the world. The tradition started in 1955 at Disneyland Park and has continued as recently as the opening of Shanghai Disney Resort back in 2016. For a while now the Walt Disney World, Orlando version has been so popular and wait times so lengthy that when the new Fantasyland expansions began they actually doubled the Dumbo ride. Now with Dumbo doing double duty and an upgraded more interactive queue to keep the interest of waiting guests, Dumbo the Flying Elephant has definitely undergone an overall improvement for the better. For at last, guests now have even more access to ride along this diehard Disney Park staple.