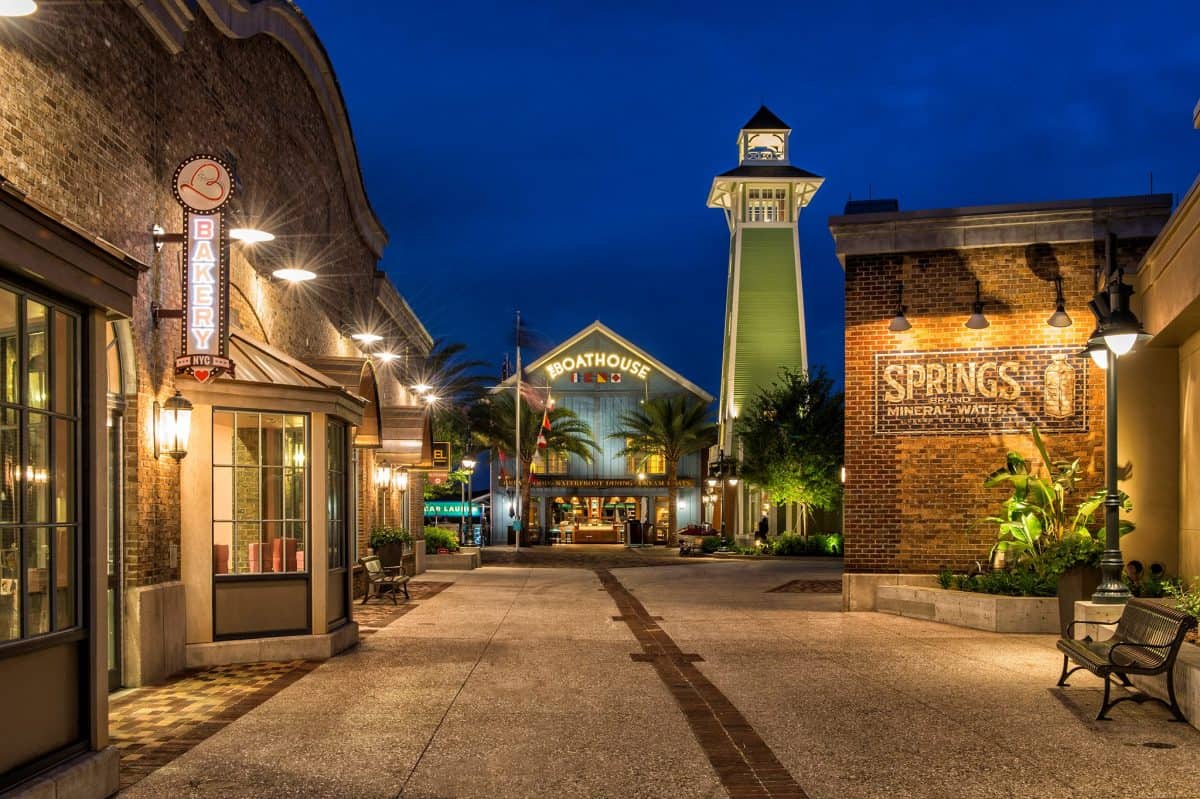 1. Convenient Commute Getting to this Disney-themed shopping, dining, and entertainment mega-venue is fairly easy. For those staying on premises at a Walt Disney World Resort it’s only a short ride away, as Disney Transport’s complimentary shuttle buses make ongoing trips between hotels and Disney Springs throughout the day. 2. District Divisions Disney Springs is broken into four distinct district divisions, or rather “neighborhoods,” as they are called. Each neighborhood boasts its own personality yet all are connected to one another by the central spring that, as the story goes, was the primary source the town was so formed around. It’s not unlike the different themed lands of a specific Disney Parks. 3. Empress Lilly You may have seen that lovely paddle steamer riverboat docked at the Disney Springs Marketplace and serving as the site for the still young Paddlefish restaurant, but this beauty of a boat has a long and enduring history that goes way back. Not truly a boat, but rather a nostalgic replica designed to look like the charming and quaint riverboats of the 19th century, it was originally known as the Empress Lilly—named for Walt Disney’s wife Lillian Disney. 4. Movie Yes, even in Disney World there is a place where you can catch all the latest hit blockbuster releases. This place is AMC Disney Springs 24, and it happens to be one of the largest theater complexes in all of Florida. 5. Taxi Water Tour You’re eyes aren’t deceiving you if you think you see cars driving through the waters of Lake Buena Vista, because they really are. 6. Exciting Entertainment Disney Springs is the ultimate entertainment hub, with plenty to take in for all ages and interests. And for those looking to live stage performances and concert events the possibilities just go on and on. 7. A splendid split Disney always ups the standards on everything, from dining to hotel stays, and of course any other activities that would be considered ordinary anywhere else. So it’s no surprise that the various businesses found at Disney Springs cater to offering the very best of the best experiences. 8. Electrifying Edison You certainly have your pick of extraordinary eats at Disney Springs, with many restaurants boasting fun themes and elaborate backstories. One newer example that plays on the idea of past pioneering marvels in innovation is The Edison. This inventive new establishment follows the carefully crafted theme for having once served as the town’s functioning power plant back in the 1920s. 9. Dino-sized Dining The Edison isn’t the only blast from the past dining experience to be had at Disney Springs. You can go even further back on the timeline with a meal at T-Rex Café. At this prehistoric paradise, you will be awestruck by the many interactive features surrounding you, including colossal animatronic dinosaurs, giant bugs, meteor showers, bioluminescent lighting, and so much more. 10. Bakery Full Of Love Since “amorette” literally means “little love,” in French, it seems fitting that Amorette’s Patisserie is renowned for baking up an array of decadent delights you’re bound to fall in love with. At this bakery/pastry shop you’ll find an elaborate inventory of goodies ranging in everything from pastries to cakes, cookies to éclairs, and even special dietary features, including gluten-free items. 11. Building The Best Of Times LEGO fans visiting Disney Springs rejoice, for the LEGO Store awaits you with more promise for innovation and imagination than you’d ever expect to find at your typical LEGO-themed retailer. From special themed sets, to hard-to-find rare pieces, this megastore boasts plenty of exclusive must-haves any enthusiast would be most ecstatic to get their hands on. 12. Star Wars Experience Disney Springs is laden with out-of-this-world experiences to boot, but one such pursuit that really drives this point is the new hyper-reality interactive experience you get with Star Wars Secrets of the Empire by ILMxLAB and the VOID. 13. Sitting on top of the “Disney World” Those brave souls unbothered by heights can elevate their experience at Disney Springs yet further by taking on a most stunning aerial endeavor. Based in Paris, France, Aerophile is the leading tethered helium balloon company in the whole world. 14. A World of Disney specialty shops It goes without saying that Disney Springs is home to a vast array of themed Disney shops. From The Wonderful World of Disney to Disney’s Wonderful World of Memories, Bibbidi Bobbidi Boutique to The Art of Disney, the list goes on. You can indulge in custom sweet treats and spirits at Disney’s Candy Cauldron, and then find your unique style among wear and accessories at DisneyStyle. 15. A promising future There is a promising future for the continued fun, food, and folly emerging at Disney Springs. Eager guests are already looking ahead to new experiences slated to debut later this year and next. One such highly anticipated example is the new NBA Experience set to open in the summer of 2019. Taking the place of the former DisneyQuest site, this new multifaceted complex will present visitors with a fully immersive NBA-inspired experience to include interactive games and competitions, themed retail shopping, and even adjacent dining. There’s always something exciting springing up at Disney Springs.
By Laura