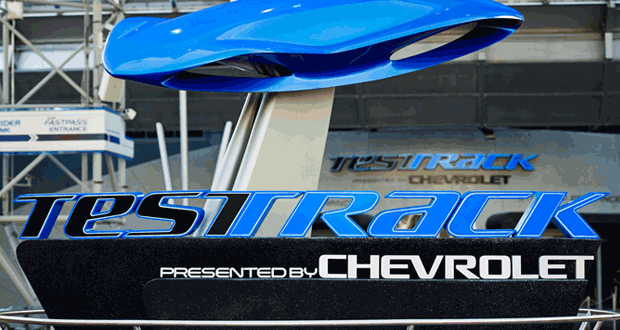 When I go to Epcot, I always rush to Test Track as soon as it opens. As a little girl I loved walking through the queue filled with torn up engines and destroyed test dummies. It was also perfect for my family because the car sit three passengers in each row, perfect for an only child to sit between both of her parents. Not many rides would let all three of us sit together, which always had me choosing which parent to sit with for most rides. No matter how old I get or however Epcot redesigns Test Track, I know I am bound to love it. Though it has undergone a major facelift in 2012, the ride will always be one of my top five Disney rides. Here are some facts about the original and renovated ride that will have you rushing to Epcot to hop onboard this unique attraction!

15. Original Ride. The original Test Track opened in 1999 and was sponsored by General Motors. Disney and GM agreed to close the World of Motion in order to finance Test Track, a ride focusing only on cars. Since GM wasn’t doing so well and could only afford to sign one year contracts, it seemed right to close the World of Motion to focus on a thrill ride that would showcase the company’s cars and how they were made.

14. Revamped Ride. In spring of 2012, Test Track closed for renovations and was later reopened in December 2012. The new ride is no longer sponsored by GM but by GM’s Chevrolet division. The original ride remains intact but the entire queue and ride concept were redone. It was heavily inspired by Tron: Legacy and now features the innovation side of car building. Guests now design their cars and put them to the test, rather than following the original test dummy storyline.

13. Fastest Attraction. Test Track holds the record for being the fastest Disney attraction. That even beats the Rock ‘N’ Rollercoaster at Hollywood Studios!

11. Sentimental Touches. In the original queue the photos of children were actual photos of the Imagineers’ kids! It’s a sweet touch for those who built the ride, but sadly the sentiments don’t go with the new motif and were removed.

10. Slowed Down Speed. Originally Test Track was intended to go 95 miles per hour on the outside stretch of the attraction, however due to the steep embankments and Florida’s legal speed limit being 65, the speed was lowered for safety reasons. Still, 65 is incredibly fast and a lot safer for all riders.

9. Shutting Down for Safety. One unfortunate aspect to Test Track is that it will shut down if lightning is detected within a five mile radius or if it is raining. Since part of the attraction is outside, it is for everyone’s safety that it closes until the weather is better. Keep an eye on the weather because it could reopen later, giving you an opportunity to be one of the firsts back in line!

8. Built to Withstand a Hurricane. Florida is prone to inclement weather, especially hurricanes. Imagineers had to design a track that could withstand possible hurricanes since 2,600 feet of the track is located outside. The track has been built to withstand winds up to 200 miles per hour! We know at least one attraction won’t be blown away!

7. Single Riders. If you don’t mind splitting up your party for the duration of the five and a half minute ride, the Single Rider line is the way to go! Because the cars seat six passengers, it’s usually an odd number for most families, so single riders always get through quickly. The only downside is that single riders have 30 seconds to select a predesigned car rather than building one yourself in the main queue. Same goes for FastPass+ riders, too.

6. Longest Ride. Test Track is not only the fastest Disney attraction but also the longest. The length of the track is 5,246 feet which only 34 feet short of a mile.

5. No More Hot/Cold. Some guests have complained that the new version of the ride is lacking due to the subtraction of the temperature tests. In the original, the temperature would fluctuate by 100 degrees to test the car’s ability in extreme environments. Now, the attraction uses holographic projections instead.

4. Breaking System. The Test Track cars have another unique feature in that they have six braking systems on each car. To compare, the cars we drive only have two. Since they are expected to last one million miles, having more breaking systems must help with making these cars last as long as possible.

3. Only 31 Cars. The original Test Track had a total of 31 cars with 25-26 being active. The new cars are almost identical to the old ones, as is the number of active cars. It might not seem like a lot, but 25 active cars can get through 1,200 guests per hour!

2. Powerful Computers. Every vehicle has three on-board computers. The power of those combined is more powerful than the processing power of the Space Shuttle!

1. Super Speed. It only takes 8.8 seconds for the cars to go from 0-65! The cars are also equipped with 250 Horsepower – nearly equal to a supercharged 3.8 Liter/240 Horsepower 1997 Pontiac Grand Prix! When the ride was first being designed in 1997, the Grand Prix seemed like a good choice to model the test vehicles after and even after the 2012 renovation, they still keep to the model. It’s a good way to still pay tribute to the original version of the ride!

For more information about this and other rides at Walt Disney World, consider planning and booking your next Disney trip with an Authorized Disney Vacation Planner you can trust like Mickey Travels. They’ll help you get the best Walt Disney World deal, share expert advice and their services are totally FREE! It’s genius!