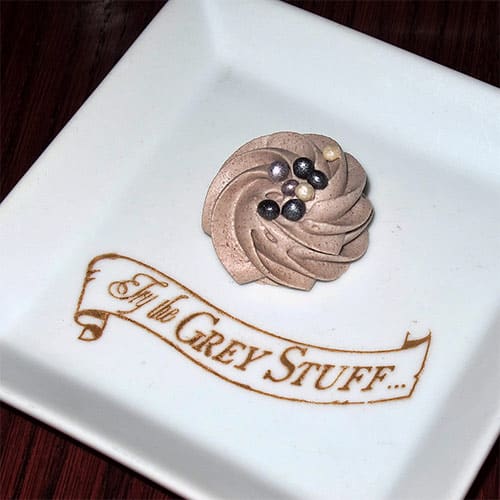 So, what exactly is “the grey stuff” Lumiere references in Beauty and the Beast? Disney dishes up the answer at the Magic Kingdom’s Be Our Guest restaurant. It’s a scrumptious cookies and cream whipped dessert originally presented as a panna cotta, but is now more mousse-like in texture after slight recipe alterations. Also, rather than being served as a specialty item available exclusively to those celebrating a special occasion, it’s now a regular fixing on the menu, offered as a cupcake toping for the decadently delightful Master’s Cupcake.

6. The greatness of grapefruit

You more than likely wouldn’t consider grapefruit a conventional dessert pairing (and a delicious one at that) but that’s just what you’ll find at the Brown Derby at Disney’s Hollywood Studios. This unique concoction was originally a house exclusive invented by a chef at one of the original Brown Derby restaurants in California. At the request of a noted patron/columnist that the restaurant offer a healthier dessert—something with grapefruit in it to add a “slimming” effect, the owner gave the chef directions to put together something with grapefruit in it. So was born this famed favorite. Laden with multiple layers of cream cheese frosting, the dessert didn’t quite hit the mark on being “healthier” per se, but it did go on to become an exclusive house hit. And now Disney carries on the magic with its own grapefruit cake offered at its own Brown Derby Restaurant.