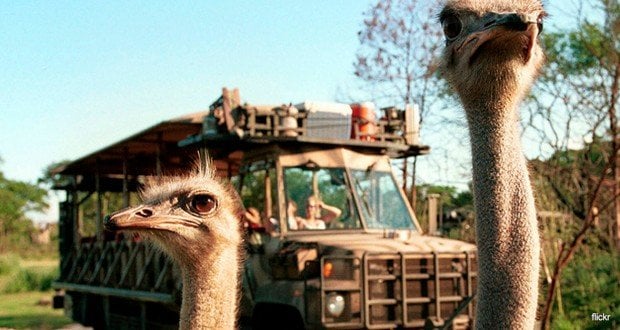 From the very first “jambo” (hello) to the very last “kwaherini” (goodbye) you hear on the Kilimanjaro Safaris ride, you are fully immersed in the experience of traveling across the African veldt. Disney’s Animal Kingdom’s premier attraction does an incredible job of combining realistic settings, a bouncy safari truck ride, and exotic, beautiful animals into a magical adventure that is a different experience every time you do it. Here are 16 things you might not know about this incredible attraction:

The entire Magic Kingdom theme park (107 acres) could fit entirely within the area taken up by the Kilimanjaro Safari (110 acres). It is the largest attraction in all of the Disney parks with regard to area covered.

To create the Kilimanjaro Safaris, Disney had to move over 1.5 million cubic yards of dirt and place 2.3 million trees, bushes, and plants.

3. It Was All Started by a Walt

The original concept for the Jungle Cruise in the Magic Kingdom called for real animals, but it was believed that they would be too unpredictable so audio animatronic animals were used instead. It was when Disney’s Animal Kingdom was being planned that Imagineers decided having live animals in an attraction was a real possibility, and Walt’s vision was finally realized in Kilimanjaro Safaris.

4. How Much is that Rhino in the Window?

When obtaining animals for the opening of Animal Kingdom, Disney opted to bring them in from other zoos and reputable breeders rather than get the animals from the wild.

Through the careful placement of salt licks, fodder like hay and grass, and fresh water supplies, the animals are encouraged to stay close to the roads so that you can see them when you ride by in the safari vehicle. Additionally, Disney uses air conditioned rocks and other temperature “tricks” to coax the animals to stay within view of the guests on the safari ride.

Disney uses water features, moats, electric fences, and natural barriers to keep the animals within their proper areas. Additionally, cattle guards, wires, and chains are placed on the ground to prevent the animals from crossing into other areas.

Audio cues are used to call in the various animal species to their enclosures at night. Sounds that are used include drums, whistles, horns, bells, and duck calls!

8. Did the Flamingos Find It First?

When rolling by the flamingo island during the safari, take note of the island’s shape. It’s a classic Mickey head shape – a Hidden Mickey.

The Kilimanjaro Safaris ride is one of the more popular places for Cast Members to work in all the Disney parks. Previous cast members have even set up reunions to get together with their former co-workers on Kilimanjaro Safaris.

10. What Time is the Animal Parade?

It is generally considered that the best time to ride the Kilimanjaro Safaris is first thing in the morning or around 2 or 3 o’clock in the afternoon since the animals tend to be most active at those times.

The ride has changed a few times over the years, including before it even opened! A startling prop of an elephant killed by poachers was removed prior to Kilimanjaro Safaris opening due to negative comments from ride testers. A storyline based around poachers and featuring Little Red, a juvenile elephant, was used for years before changing to a storyline about a missing elephant. Eventually, even that storyline was removed from the ride as well. The focus of the Kilimanjaro Safaris ride is now completely on the real animals.

12. Where You Sit Matters

Guests on Kilimanjaro Safaris can occasionally see black vultures lounging around on the savannah. They are native to Florida and are not supposed to be in the attraction.

Two thousand pounds of manure is produced by the elephants at Disney’s Animal Kingdom every single day. But this is Disney, so even that is recycled and used as fertilizer on the grounds across the Disney property.

15. I Think That I Shall Never See

In order to create the appearance of flat-top Acacia trees, which are commonly found on the savannahs of Africa, Disney simply trims Florida oak trees to look like them. Probably not too tough for a company that can turn bushes into Disney characters.

16. Are Those Real Animals?

What was the most amazing sight or experience that you had on your Kilimanjaro Safaris ride? Or if you’ve not yet had the opportunity to go to Disney’s Animal Kingdom to ride it, what would be your favorite animal to see?

Want more interesting info about Kilimanjaro Safari, consider planning and booking your next Disney trip with an Authorized Disney Vacation Planner you can trust like Mickey Travels. They’ll help you get the best price for your vacation, share expert advice and their services are totally FREE! It’s genius! “Kwaherini”