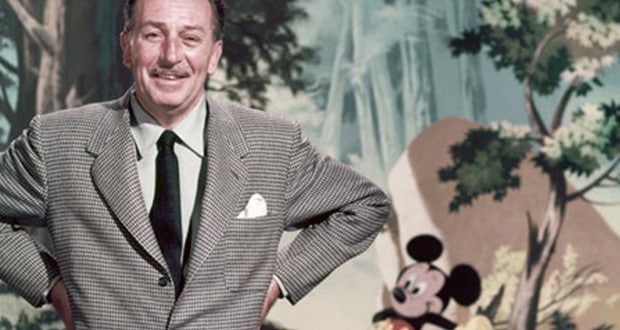 “Walt Disney was outnumbered by women in his household. His beloved wife, ‘Lillian’, his two daughters even the family dog was a female. All the while grumbling good-naturedly, it appears Walt enjoyed being outnumbered by the ladies. In “Walt Disney: An American Original”, by Bob Thomas, the author writes, “He appreciated femininity, and he liked to play the role of the father”. There was often another female relative invited to live with the family.

In a time when most women were limited to more minor roles in business, Walt had no issue with placing women in roles of authority, where they used their talents to build and influence Disney Studios. Even though Walt came across as somewhat shy around ladies, this seemingly posed no problem for him. One example is the relationship he had with Thelma Howard, the Disney’s live-in housekeeper and cook for over 30 years. Thelma never dreamed of landing a job in this huge mansion with 8 bedrooms, 17 bathrooms, a pool, gym, and putting green. After all, she was born to a poor family of farmers, and when she moved to LA after dropping out of college, she held down three jobs just to make ends meet.

Thelma was one of two strong feminine daily influences in Walt’s life. Nicknamed “Foo-Foo”, Thelma is described as a gruff, crusty, chain-smoking, no nonsense person, who was full of love for and fully accepted by the Disney family. She fit into their lives and loved the two daughters, enjoying their help in the kitchen. Thelma was totally devoted to the Disney family. One funny anecdote was that she was certain to keep the refrigerator stocked with hot dogs for Walt. When he came home from work, his habit was to grab 2-3 cold hotdogs and share with his pet poodle “Lady” (maybe this is where he got the idea for Lady and the Tramp).

Thelma suffered tragedy when she was only 6, with the death of her mother and later the death of a sister in a fire. She had a son, Michael, from a brief marriage. This only child was developmentally disabled. Walt’s grandchild Chris Miller said, “My grandfather had an incredible rapport with her. They seemed to share everything, from a sense of humor to their notions about what was happening with the kids and what was best for them.” Thelma began her duties at the Disney residence in 1951 when she was 38 years old. In addition to her salary, Walt began giving her a few shares of Disney stock as a Christmas gift, for birthdays, and other special events. Thelma continued to live frugally in a two bedroom home throughout the rest of her life until her health failed. Thelma died in a nursing home in 1994. She was buried at Forest Lawn overlooking the Disney Studios.

Thelma’s devotion to the Disney family caused her to never want to part with her stocks and she even bought more Disney stocks herself. The rising value of the stock was so great that at her death, Thelma was a multi-millionaire. Her fortune was shared to care for her disabled son and a foundation set up in her name to give to causes that focus on arts education and disadvantaged children. At the time of her death, Thelma was worth 9.4 million dollars and was greatly mourned as cherished member of the Disney family.

Hazel George is another strong woman who worked with Walt on a daily basis. Having injured his back playing polo, Walt sometimes could not bend to get into the car. So he had his “laughing place” set up next to his office where the studio nurse could apply hot packs to his injuries hoping to ease his pain.
It was during those physical therapy sessions that Walt listened to Hazel’s musings, hearing her ideas and plans, and also the occasional bit of gossip. Walt noted that their exchanges were humorous and displayed Hazel’s sharp wit. During one of his therapy sessions Walt said: “After I die, I would hate to look down at this studio and find everything in a mess,” Hazel responded with a snarky “What makes you think you won’t be using a periscope?” she replied joking that he might actually go to hell.

Walt appreciated Hazel’s honesty and outspokenness regarding what he shared with her about his work.
Hazel was the daughter of a copper miner in Cochise County, Arizona. She was a ward of the court at 13, mothered a daughter after a brief marriage, and worked as a nurse at the Disney Studios by 1941. Hazel George appreciated Walt Disney and said “I felt that Walt’s greatest talent was recognizing the potential in others – He really sought to bring out the best in people, whether they were artists, story people or accountants. He personally went through every day’s work at the Studio. He was a very hard worker and a wonderful man. He encouraged me to write lyrics for music at the Studio, as he knew that I wasn’t really using my college degree in literature as a nurse. So I did, and he loved my writing. Walt was a special man, even today, I have a lot to thank him for.”

Under the pseudonym “Gil George,” she co-wrote over 90 songs for Disney. Her work included songs for films like “The Light in the Forest”, “Perri”, “Tonka”, “Westward Ho the Wagons”, and “Old Yeller”. She was also a frequent contributor to television shows including the original Disneyland show, “Zorro”, and the original “Mickey Mouse Club”. For the “Mickey Mouse Club”, she was responsible for the song for “Talent Roundup”, the “Corky and White Shadow” serial, and several of the Jimmie Dodd “Doddisms” among other contributions. She was a lyricist, collaborating mainly with her long-time companion, studio composer Paul Smith. She also worked with George Bruns and Jimmie Dodd to write songs for the “Mickey Mouse Club” show.

Hazel’s contributions to Disney were numerous and often overlooked. It was Hazel who convinced Walt to go to the Chicago Railroad Fair. That Fair gave Disney the structure for what became Disneyland. She was head of the Disneyland Boosters and Backers Club that helped raise money for what was then the “Mickey Mouse Park”. It was her enthusiasm that convinced Roy Disney to be part of the Disney dream.

Hazel passed away on March 12, 1996. Only oral interviews with her survive, and they currently remain unpublished. Bob Thomas, who authored the biography “Walt Disney: An American Original”, acknowledged that she provided him with the key to understanding Walt’s personality.

“One thing that I learned from my long time friendship with Walt was that in most cases, he was strongly motivated by love,” remembered Hazel. “He loved his family very much, and would tell me about his daughters’ exploits, and about his wife Lilly. He really loved them dearly, and enjoyed telling me all the wonderful stories of what they were doing. He also loved kids in general and animals, especially his own little dog. He would often tell me stories about that wonderful little poodle. He never got tired of talking about animals.”

Maybe it was Walt’s appreciation for the gifts and talents the women in his life displayed that helped him to create such amazing female leads in his movies. His appreciation of a person’s gifts and talents despite their gender has created a world of magic and dreams that inspire us all! Thanks Walt for encouraging us to believe in ourselves!