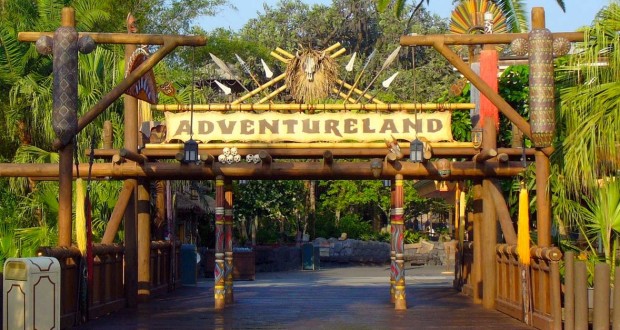 6. Melting Pot of Adventure: Adventureland is full of different exotic flairs, whether it is in the architecture, the ride attractions or the décor. This is actually a mixture of Mexico, the Caribbean, Polynesia and the Middle East. The buildings are all designed around these ideas. You’ll find jungle huts, Victorian buildings and more in this area. Make sure you take the time to look around and really take in this area’s architecture and landscaping because it is really impressive.

5. Adventureland Growth: Adventureland first opened at Walt Disney World in 1971. When it first opened there were only 3 attractions in this area! They were the Tropical Serenade, Swiss Family Robinson Treehouse and the Jungle Cruise. The original focus was a 1950’s exotic vacation. The land started to expand pretty quickly, with the opening of Pirates of the Caribbean ride in 1973. The next biggest expansion was in 2001 with the success of Aladdin, this land expanded by adding that Arabian village.

4. Walt Disney’s Enchanted Tiki Room: This attraction first opened in October 1971 and was called the Tropical Serenade. Over the years, it has gone through a few changes. The show closed in 1997 and reopened in 1998 as “The Enchanted Tiki Room: Under New Management”. This was an altered version of Walt Disney’s original idea, and added modern characters Iago and Zazu from Disney’s Aladdin and the Lion King. After a small fire several damaged the Iago animatronic in 2011, the Walt Disney Company decided to refurbish this attraction and return it close to it’s original state. This show provides stadium seating and a great animatronic show featuring exotic singing birds, enchanted Tiki heads and more. The four original stars are now back in charge of the show: 4 birds named Pierre, Jose, Michael and Fritz. The late actor Jerry Orbach, who was also the voice of Lumiere in Disney’s Beauty and the Beast, voices Pierre!

3. Jungle Cruise: The Jungle Cruise is a classic attraction in Adventureland. It first opened in 1971 and was actually a very serious attraction in the beginning. The ride was based on Walt Disney’s True Life Adventure series. After a few years, the Jungle skippers were given the go ahead to add jokes and funny stories into their narratives. Originally, Walt Disney wanted to use live animals in the Jungle Cruise, he quickly realized that animals would not corporate as during the show and decided to use animatronics instead. This classic 9-minute ride is not one to be missed. It can get quite busy, so this may be a ride for which you will want to get a FastPass.

2. Dole Whip and Citrus Swirl: Adventureland is home to two great treat shops: Aloha Isle and the Sunshine Tree Terrace. At Aloha Isle you can get the famous Dole Whip. Dole Whip is a delicious pineapple soft serve treat that is a must try when you are in Adventureland. At Sunshine Tree Terrace you can try the original orange swirl: citrus slush swirled with vanilla soft serve. Both of these delicious treats are unique to Adventureland and we definitely recommend you try at least one (but we would say both!).

1. Ride magic carpets and meet the stars of Aladdin: The Magic Carpets of Aladdin is a colorful ride that fits perfectly in Adventureland. The design of this ride is very similar to the Dumbo ride and is great for little kids and all ages. The carpets fly through the air in a circle and you can control how high up you go. As you walk around the attraction look down on the ground for hidden embedded gems, but beware of spitting camels, as well! Adjacent to the Magic Carpets of Aladdin you can meet and greet with Jasmine and Aladdin. They are a fabulous couple to meet and interact with. We highly recommend you take the time out of your day to meet this exotic couple and take a ride to a whole new world!

These are few secrets and surprises of Adventureland. Do you know any? If so feel free to leave them in the comments section below!