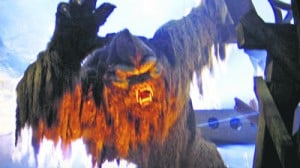 Though Disney Imagineers had already created missing link creatures before (the Abominable Snowman at Disneyland’s Matterhorn Bobsleds, for example) constructing a yeti for this attraction was a first and required extensive research. Because they knew they weren’t dealing with another fantasy creature but rather a manifestation of “real” local lore and legend, the team knew they had to get it right. In-depth studies and research were conducted to do the Yeti justice and make it as authentic as possible. Imagineers were even flown to parts of Nepal, China, and Tibet where they spoke with locals who claim the yeti exists. The team collaborated descriptions and depictions of the beast and even studied various known primates in order to accurately depict different movements and other attributes.

Despite incorporating all those accurate movements and whatnot into the newly constructed Yeti, the creature falls short of serving his intended purpose entirely. He was supposed to reach down and lunge at riders as they passed by, and earlier on he did just that. Due to constant breakdowns (and a large crack under his foundation), however, he was switched off into what is called “B-mode,” relying on strobe lights and other effects to highlight his scariness to passersby. This technique gives the illusion that the stoic creature is moving, and the Yeti has since been unofficially dubbed “Disco Yeti” as a result. Today, the Yeti remains the largest audio-animatronic figure ever built by Disney, standing at 25 feet, with its skin spanning a thousand square feet—held together by a thousand snaps and 250 zippers.  Photo credit Cryptomundo