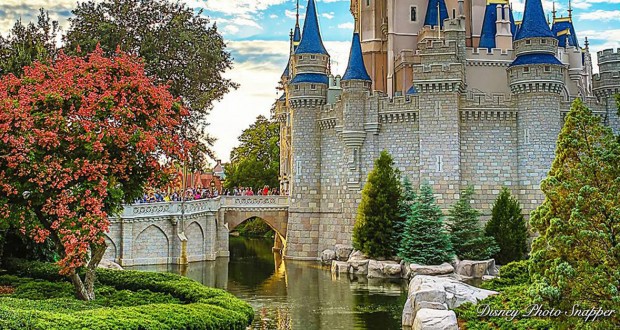 Sometimes when we are racing from ride to ride we miss the small things that really make Magic Kingdom so incredible. Whether it’s your first visit or you’ve been there a hundred times, you may find something new or learn something you never knew before. Here are some of the hidden gems that we often miss.

Tucked back on the right side of Main Street there is a little nook with benches and chairs. It seems like just an ordinary relaxing spot, but if you look up at the windows, they are advertising singing and tap dancing lessons. If you listen closely, you can hear singers practicing their warm-ups and the slight sound of tap dancing.

As you walk down Main Street USA, you will notice writings on the windows. You might not have paid much attention to them, but each name has a special meaning behind it. You’ll see names of Walt’s family, friends, and people involved with the Walt Disney Company. You will also find the names of fake companies Walt used to purchase property for Disney World. So next time you walk down Main Street, take a look at the windows and see if you can recognize any of the names on the windows.

As you are walking through Liberty Square you may notice the color changes in the walkways. The majority of the ground is a reddish stone, but you’ll notice a brown pathway leading all throughout the Liberty Square area. This is supposed to represent the sewage that would run through the town in the 1700’s.

Near the Hall of Presidents attraction, you will see two lanterns hanging in the windows. This is supposed to represent Paul Revere’s “two if by sea”.

If you look closely at the windows in Liberty Square, you will notice that the shutters are crooked. This is because during that time period, people needed all the metal they could find to turn into ammunition. So they would take the hinges off of the shutters and replace it with leather. Over time the leather would stretch and droop and cause the shutters to slant.

Finding hidden Mickeys throughout Disney World is always fun. One of the hardest ones to find is the one inside the Haunted Mansion. When you are in the graveyard scene, look to your right. You will see a Viking ghost wearing a hat, behind her will be a coffin standing upright; the hidden Mickey will be inside. It might take you a few tries, but you’ll eventually see it.
There’s also another hidden Mickey made out of the plates on the table in the ballroom scene. This one is much easier to find.

Right behind Cinderella’s Castle is Prince Charming Regal Carrousel. There are many different horses, but one horse has a gold ribbon around its tail. This is supposedly Cinderella’s favorite horse.

If you have been on the Jungle Cruise ride at Magic Kingdom, then you might recall seeing the back end of a plane that had crashed. The other half of the plane, the front half, is used in the Casablanca scene in The Great Movie Ride at Hollywood Studios.

So next time you visit Magic Kingdom, make sure you look for these neat little hidden gems. Maybe you might even find some of your own! Do you have any “hidden gems” to add to our list?