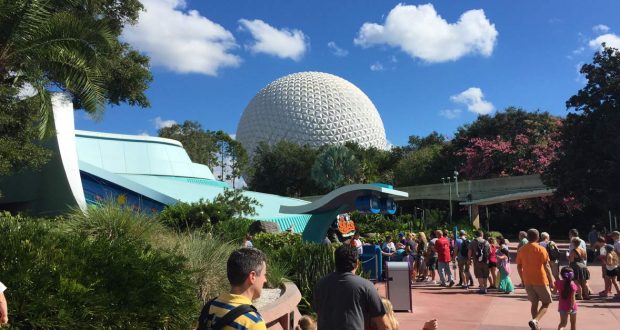 If you’re planning your first visit to Walt Disney World, you may be a little confused by Epcot. Is it even a theme park? In a way, it’s actually two. The World Showcase gives you a glimpse in the culture of a few of our world neighbors. And Futureworld, as the name suggests, explores science, techology, and their possibilities for the future. Here is your beginner’s guide to Epcot’s Futureworld.

1. EPCOT is an Acronym

Ever wonder how Epcot got it’s unusual name? It’s an acronym for Experimental Prototype Community of Tomorrow. When Walt Disney first envisioned Epcot it was going to be an actual city with around 20,000 residents! Trasportation would be via monorail or people mover (like the Tomorrowland Transit Authroity in Magic Kingdom) and cars would have to stay underground. Walt Disney wasn’t able to get the permits required for Epcot until construction was complete on Magic Kingdom. Walt Disney died before MK was finished, and the Disney corporation didn’t want to move forward with the city plan without his guidence. Today, Celebration, FL is a bit of a realization of that idea, and the experimental and future concepts are embodied in the Futureworld section of Epcot.

And it’s not “The Big Ball.” The large, silver, geodesic sphere that is the most famous symbol of Epcot is called Spaceship Earth, and it’s actually a ride! The Spaceship Earth ride journeys through the history of human communication, from prehistoric times to new and future technologies. It’s an Epcot tradition and a must-do experience!

3. Attractions are arranged in Pavilions

Unlike the other Walt Disney World parks, most things in Epcot are arranged by Pavillion. In the World Showcase, different countries have pavillions, and in Futureworld there are pavillions that cover different aspects of science and technology. Many of the pavillions contain multiple attractions, restaurants, shops, and activities. Plan to do all of the attractions in one pavillion together; you’ll waste a lot of time and energy going from Turtle Talk with Crush to Test Track and back to The Seas for a dining reservation at The Coral Reef Restaurant. Study the map before you make Fast Pass+ or Advance Dining Reservations.

Unlike in Magic Kingdom, all Fast Pass+ eligible rides can use the same Fast Pass+ reservation, the attractions in Epcot are categorized into two tiers. When making your reservations, you can make one reservation from the Tier 1 group and two from Tier 2. Epcot does some shifting around of which rides are which tiers, but it seems that the following should be in place for some time:

• Living with the Land

• The Seas with Nemo & Friends

• Journey into Imagination with Figment

Do some research to see which attractions are most importat to you so you use your reservations wisely.

5. The Seas with Nemo and Friends Pavillion

The pavillion closest to the EPCOT main gate in Futureworld West is The Seas with Nemo and Friends. This incredible pavillion hosts a ride of the same name, an interactive theater experience featuring everyone’s favorite turtle, Turtle Talk with Crush, and a fun photo opp with Bruce the shark. And don’t miss the real stars of The Seas with Nemo and Friends, the live animals in the massive 5.7 million gallon salt water aquarium! It’s so big that Space Ship Earth would fit inside! For an extra-close look, schedule a snorkeling or scuba experience in the giant tank. Or if you prefer to stay dry, have a meal overlooking the sea life in the Coral Reef Restaurant.

The Land is another pavillion with a lot going on! It houses one of the most popular rides in Epcot, Soarin’. Because of Soarin’s popularity, you might want to consider a Fast Pass+ reservation. Also in The Land is “Living with the Land,” a gentle boat ride through Epcot’s incredible greenhouses. It’s a really fun place to look for hidden Mickeys. “Circle of Life: An Environmental Fable” is a film about conservation featuring the stars of “The Lion King.” There are also two restaurants in The Land, The Garden Grill, which features character dining, and Sunshine Seasons, a large quick-service cafeteria.

7. Journey into Imagination With Figment

Did you visit Epcot in its infancy and fall in love with the sweet little dragon named Figment? Well he’s still around, but the ride has changed tremendouly from the original, and many Disney Fanatics don’t think the changes are for the better. But Figment is such a beloved character that it’s still worth a visit (and the lines are rarely long). The ride still concludes with a large interactive activity area that is really fun for kids. The pavillion also hosts the Disney & Pixar Short Film Festival, where you can view some favorite short films in 4D. And the beloved dancing fountains are located outside of Journey Into the Imagination With Figment, and are a great way to cool off on a hot day.

Test Track is one of the most popular rides at Epcot, and it and it’s accompanying activites occupy an entire pavillion. This ride gives guests a chance to design their own cars then give them the ultimate test drive, culminating in a high-speed race around the outside of the building. After the ride, guests get the opportunity to continue experimenting with their car at a variety of interactive kiosks. Prepare to spend some time in the post-ride area, as there is a lot to do! Because Test Track is so popular, expect to wait in a long line or use one of your Fast Pass+ reservations.

Mission Space is perhaps the most intense ride at Epcot, simulating astronaut training and a space shuttle launch. If this sounds a little too rough for you, you can opt for “Team Green,” which allows you to experience the ride without the spinning used to simulate shuttle launch. Got an iron stomach? Try Team Orange, but don’t say I didn’t warn you! Also located in the Mission Space pavillion is Advanced Training Lab, an interactive play area for all ages (and stomachs.)

An update of the original Epcot attractio “The Universe of Energy,” “Ellen’s Energy Adventure” tells the story of fossil fuels and energy on a slow ride, complete with dinosaurs! Those dinosaurs are an Epcot classic, but beware, this experience lasts 45 minutes. Be sure to make a bathroom visit before you start your adventure! On a hot day, 45 minutes of sitting and air conditioning can be a welcome break.

11. The Unmarked Dome on the Map

If you’ve studied your Epcot map you’ve probably noticed an unmarked, dome-shaped pavillion between Mission Space and Ellen’s Energy Adventure. From 1989-2007 this was The Wonders of Life Pavillion. It included interactive activites, rides and movies all exploring the human body. After the close of The Wonders of Life, Disney removed the rides and attractions. Now the building is used during the Epcot International Food & Wine Festival and the Epcot International Flower and Garden Festival (more on those later), as well as for private and corporate events.

Looking for some refreshment? Stop by Club Cool in Innoventions West. In addition to shopping for a variety of Coca-cola merchandise, you can grab a cup and try free samples of Coca-Cola products from around the world. It’s fun (and sometimes a little gross) to see for yourself how tastes differ in other countries. Be sure to try the Beverly, it’s an Epcot tradition!

We usually think of the Magic Kingdom as the best place to see characters. But you can meet Mickey, Minnie, and Goofy in Futureworld! The characters are ready to meet and greet their fans in the Epcot Charater Spot in Innoventions West. Other characters are available nearby; right now you can meet Baymax from “Big Hero 6” and Joy and Sadness from “Inside Out.”

Epcot hosts two very popular events every year. While dates vary, the Epcot International Food & Wine Festival is held in the fall, and the Epcot International Flower and Garden Festival is held in the spring. The International Food and Wine Festival features samples of food and drinks from around the world, culinary demostrations, seminars on everything from mixology to cheese, and fun live music. At the Flower and Garden Festival you can view incredible topiaries of Disney characters and gorgeous flower displays, as well as take special tours, enjoy festival foods and drinks, and explore children’s play gardens. It’s fun for Epcot beginners and seasoned pros alike.

Futureworld in a unique place unlike any other theme park in the world, and half of the amazing experience that is Epcot. With some planning you can have a fantastic first visit that will have you wanting to experiece Futureworld again and again.

Laurel took her first trip to Walt Disney World when she was only 18 months old and hasn’t stopped visiting since. Now she enjoys taking her own twins and husband as often as she can. And don’t tell the boys, but sometimes she goes without them, too.