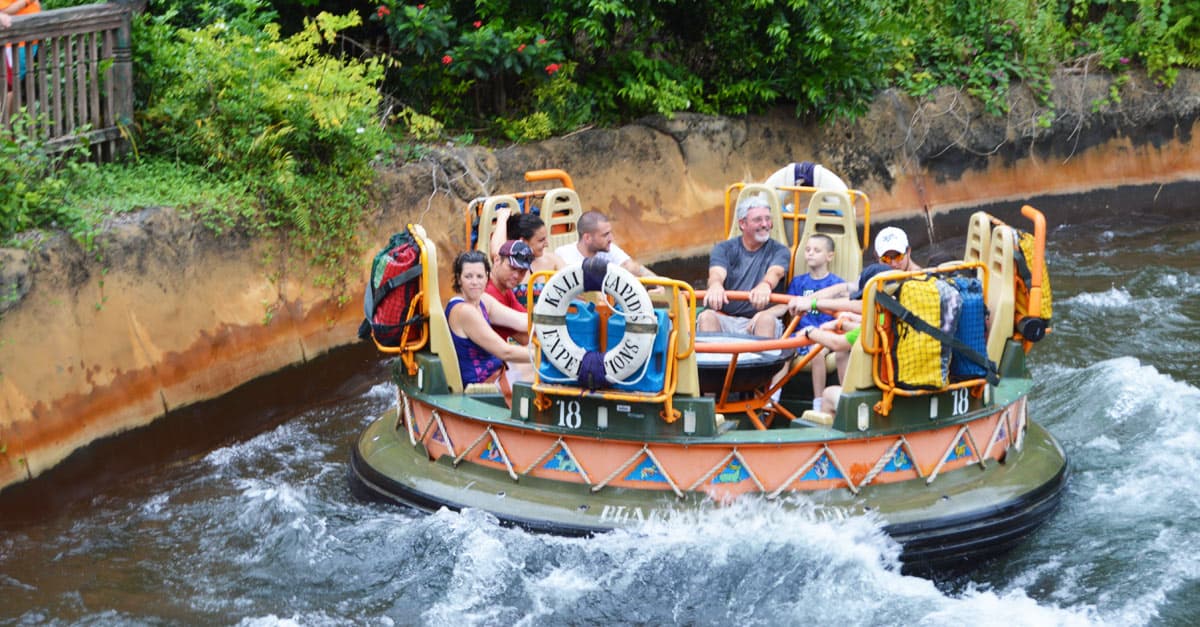 As mentioned before, Disney’s Animal Kingdom Park is home to a vast array of exciting rides and entertaining attractions. Kilimanjaro Safaris is, hands-down, the primary pick for premium Park experiences, with its 110-acre savanna featuring hundreds of different creatures native to the African continent. Other popular ride options include: DINOSAUR, Kali River Rapids, Expedition Everest – Legend of the Forbidden Mountain, and Avatar Flight of Passage, to name a few. Located in DinoLand U.S.A., DINOSAUR is a bumpy dark ride that takes visitors back in time on an “unauthorized” mission via Time Rover vehicle just moments prior to that infamous meteor strike that annihilated most life on Earth, in hopes of finding (and bringing back) an Iguanadon dinosaur.

Kali River Rapids in Asia gives a whole new meaning to the concept of wet in an all-out drenching whitewater rafting experience down a rugged river sure to leave you soaked. Also located in Asia, Expedition Everest is a thrilling rollercoaster that takes you up the steep Forbidden Mountain where you will be met with forward and backward dips, turns, drops, and even an encounter with the elusive Yeti said to make its home in this very mountain. Over in Pandora is where you will find Flight of Passage, a new simulated riding experience that takes guests on a free-spirited flyby throughout the land of Pandora from onboard the back of a banshee. Of course there are several other rides and experiences to take in all throughout Animal Kingdom as well, including calmer carnival-like experiences over in DinoLand U.S.A.

Rides aren’t the only entertaining experiences to be had at Animal Kingdom Park. There are several shows and spectacles that offer up full-fledged fun for visitors of all ages. If you head back over to Discovery Island and the Tree of Life, for example, you’ll find a creepy crawly show that’s sure to “bug” you, in a good way—It’s Tough to Be A Bug! With an auditorium hindered at the base of the Tree of Life, this 3D experience allows you to become an honorary bug and even experience effects and other surprises along the way. The Tree of Life is also home base to a nighttime spectacle—Tree of Life Awakenings, in which projection imagery effects bring to life some of the animals carved into the tree in heartwarming storylines that run on a continuous loop throughout the Park’s nighttime hours of operation. And in mentioning the Park’s nighttime operations, it should be noted that Animal Kingdom’s hours of operation have expanded in recent years—previously not operating after dark. But now that it does, there is another stellar nighttime spectacular to be added to the overall evening enjoyments at Walt Disney World—Rivers of Light: We Are One.

This show, which is performed out on the waters surrounded by open auditorium seating, celebrates the majestic beauty of nature’s diversity and creatures with high-definition projection footage of real animals throughout the world. Water, light, and music make the 17-minute nightly show, come together in a one-of-a-kind experience that ranks as one of Disney’s new popular picks, despite the absence of classic fireworks (which would not be in the best interest of the Park’s resident inhabitants). Other experiences to have as a viewer at Animal Kingdom Park include attending Finding Nemo: The Musical over in DinoLand U.S.A.—a stunning underwater adventure featuring puppetry, and Festival of the Lion King—a compilation of stunts, music, and vivid costumes that will leave you breathless. Over in Asia, there’s also Up! A Great Bird Adventure—ongoing 25-minute shows throughout the day featuring Russell and Dug from the movie Up! and starring an abundance of avian wonders from around the world.